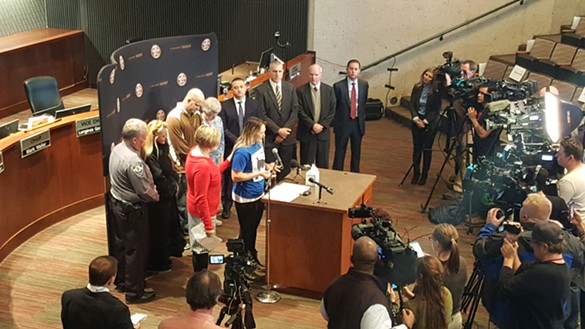 Letecia Stauch, stepmother of 11-year-old Gannon Stauch, was arrested in Horry County, South Carolina at 8 a.m. Monday, March 2, in connection with his disappearance.

Authorities held a news conference at Centennial Hall at noon March 2 to announce the pending charges against Stauch, which include murder in the first degree of a child under 12 by a person in a position of trust, child abuse resulting in death, tampering with a deceased human body and tampering with physical evidence.

While the widespread investigation that involved dozens of agencies and thousands of hours have yet to find the child’s body, authorities said they’re confident Gannon was killed.

He was reported missing on Jan. 27 via a 911 phone call from his step-mother who reported the child had not returned from a friend’s house. Major crimes took control of the case on Jan. 28.

Sheriff Bill Elder noted that five weeks to the day of the report that he was missing marked the arrest of his stepmom, who told a KKTV reporter in the early days of the investigation that she would never harm the child.

Elder expressed condolences to the family, some members of whom attended the news conference, including his mom Landen Hiott and his father Al Stauch.

“There’s no way we can express the depth of our sympathy,” Elder said.

He also noted the exhaustive effort to search for Gannon “underscores the significance of team work.” Dozens of agencies, including neighboring departments, the FBI and others aided in the investigation.

But Elder also stressed that the investigation “has only begun,” because Gannon’s body has not been found.

No clues were revealed at the news conference that leads investigators to believe Gannon was killed and that his stepmother is responsible.

Rather, Deputy District Attorney Michael Allen said the affidavit will be sealed to protect information surrounding the case and added that investigators “want to bring Gannon home” and hold the person charged accountable.

Hiott gave a tearful speech to a bank of news cameras and reporters, saying she wants justice to be served “100 percent for the pain she caused.” She also thanked all the agencies who have been involved in the search.

Letecia Stauch is being held without bail in South Carolina from which she will be extradited to face the charges in El Paso County.