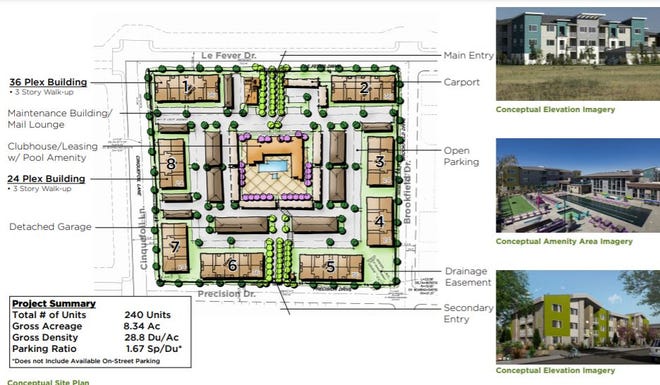 Developers of Vibe and Terra Vida apartment complexes in south Fort Collins have proposed the third leg of their “apartment neighborhood.”

Fort Collins developer Les Kaplan and Ken Kiken of Milestone Development in Denver have proposed 240 apartments adjacent to Terra Vida and Vibe and reviewed their preliminary plans with city planners on Thursday.

The project at the northeast corner of Cinquefoil Lane and Precision Drive would include eight three-story walk-up apartment buildings in a combination of studio, one- and two-bedroom units with detached garages, carports and surface lot parking. The buildings would surround a pool and clubhouse.

Like Vibe, the project is expected to be LEED certified, meaning construction will adhere to green building practices and materials, and be HUD-guaranteed, Kaplan said.

Rents will be market rate, but the loan will be guaranteed by the Department of Housing and Urban Development, Kaplan said.

The project has a long way to go, including city approval, which could take several months. Once the city signs off, developers can make their HUD loan application, which takes over a year, Kaplan said. Construction is expected to take up to a year given the current tight labor market.

The site is one-quarter mile south of East Harmony Road and west of Strauss Cabin Road, an area teeming with new and proposed apartments.

In January, Fort Collins developer J.D. Padilla won approval from the city’s planning and zoning board to build 304 apartments southeast of the intersection of Harmony and Strauss Cabin roads, just west of Interstate 25.

The project, currently known as H25 — a name that will likely change — is just east of The Wyatt apartments, 368 units also developed by Padilla.

Combined with nearly 600 apartments already developed at Vibe and Terra Vida, Milestone Development’s new project will bring the total of new and proposed apartments in the area to more than 1,500.

More:304 apartments at city’s Harmony gateway get the go-ahead

Demand for apartments remains strong as new residents move in, bringing their jobs with them during the COVID-19 pandemic. Vacancy rates last year were just over 3% and median rents were nearly $1,400 per month.