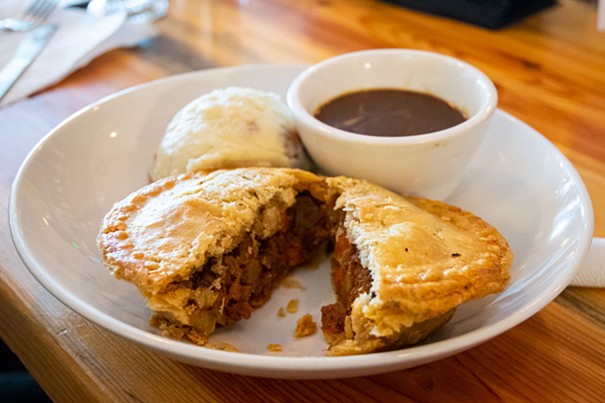 Pi Bar has the love of the neighborhood when we stop in on a Sunday morning. It’s full of luncheoners and bruncheoners alike, some with salads, some with pot pies, some with cocktails. We’re sat at the bar and served with haste, so they can handle the Sunday crowd.

From the fresh pot pies offered, we pick a Guinness’ sakes pie and a barbecue pork mac & cheese pie. The former, basically a steak and ale pie, bears meat with a pleasant toothsomeness in a sturdy but buttery crust. We get the beef and some root veggie sweetness with beer notes at the end, but it’s not bursting with flavor until we use some of the offered gravy that goes with it, which adds peppery richness it needs.

We’re jazzed for the barbecue pie, but neither component lands. The noodles vanish into mush, and we wish they’d been more al dente going into the pie so they’d have tooth, and the pork rates fine, but doesn’t add much. That said, the side cheddar gravy is on point.

Our winner of the morning: a slice of peach blueberry pie, packed with fresh-tasting, flavorful fruit, even well before peach season.