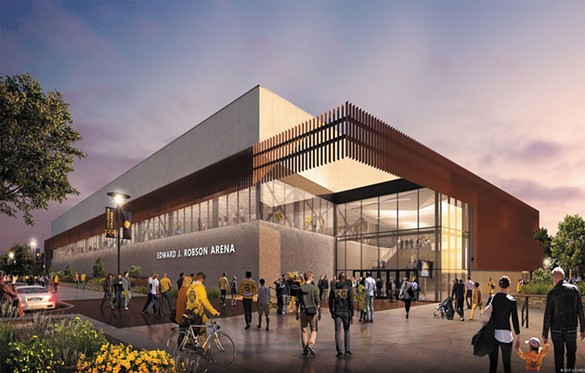 City Council unanimously approved plans for Colorado College’s 3,400-seat Edward J. Robson Arena. The venue will host CC hockey games, student life activities, and potentially “regional, national, and international events in partnership with the USOC [United States Olympic Committee] and related governing bodies,” according to a statement from Colorado College. Given that it’s part of the City for Champions initiative, the project received $9.2 million under the Colorado Regional Tourism Act to go toward the total cost of approximately $39 million.

The Great Outdoors Colorado board awarded the city of Colorado Springs a $27,000 grant to treat 17.5 acres of noxious weeds at Garden of the Gods and Rock Ledge Ranch. The project will be a collaboration with Colorado Youth Corps Association.

The Colorado Springs Police Department is warning that fentanyl, a potentially lethal synthetic opiate, is appearing in counterfeit tablets sold illicitly as prescription painkillers such as hydrocodone, oxycodone and Percocet, as well as the anti-anxiety drug Xanax. You can buy fentanyl test strips at dancesafe.org.

There will be no Christmas Eve services at the U.S. Air Force Academy Cadet Chapel this year, as the chapel is undergoing major structural work and will not be open to the public for the foreseeable future.

USA Today’s 10 Best Readers’ Choice Travel Awards ranked The Cheyenne Mountain Zoo’s Electric Safari No. 3 in the nation for best zoo lights. This annual light exhibit, featuring 85 one-of-a-kind light sculptures set up throughout the zoo, has been ranked in the top 10 on this list for four years running, but this is the highest it has ever placed. Electric Safari runs nightly through Jan. 1, except Dec. 24.