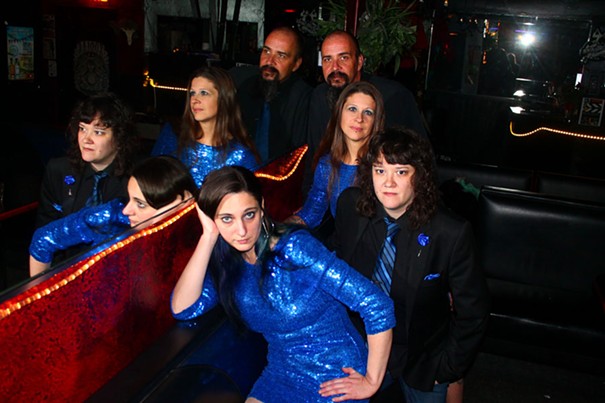 While the music scene might be slowing down a bit as we all settle in for the holidays, on Saturday, Dec. 28, The Zodiac will play host to what’s become a fun, running tradition for the venue: an end-of-year celebration of The Beatles.

This year’s festivities will see the return of the pop-up Zodiac supergroup Blue Jay Way (comprising Mam’zelle Hepzibah, Andrea Stone, Christina Stone and John Gillette) with additional music from The Short-T.E.R.M. and You Know My Name, along with a slew of burlesque, drag and belly dancing takes on the Fab Four. This includes performances from Nikita Bonita, Madame Gem, Scarlet Raven, Courtney Anne, Hazel Humdinger, Magnum Missile and many more.

As in previous years, the show will also function as a benefit for a local charity, this time around in support of Shine Nation, an after-school program that works to cultivate and bolster arts participation in the Colorado Springs area. (And, it should be noted, led by one of the area’s most multifaceted musical talents, Victoria Lipscomb.) This mixed-discipline showcase for a good cause should be a must-see for all local Beatlephiles, especially since that recently released Singles Collection box set that you probably wanted to find under the tree is sold out almost everywhere.

Of course, The Beatles had their own holiday presence — as perhaps one might expect, given the marketing juggernaut that was Beatlemania as the group ascended wildly in popularity. From 1963 to 1969, the band released a yearly Christmas flexidisc to their U.S. and UK fanclubs that included spoken messages, John Lennon’s nonsense poetry and goofiness like “Rudolph the Red-Nosed Ringo.” (Though, to be fair, the original composition “Christmas Time (Is Here Again)” from 1967? Not too shabby.)

The Beatles certainly weren’t the first pop group to indulge their fans for the holidays, nor were they the last. Indeed, as we start to consider the musical year in review, there are plenty of seasonal offerings to enjoy from some familiar faces.

Swedish singer/songwriter Sofia Talvik, who received a standing ovation when she performed at The Black Rose Acoustic Society in May of this year, has released a free Christmas single every year for more than a decade, and reimagined many of these striking tracks for the 2017 LP When Winter Comes. This year is no exception, and Talvik’s new track, “Christmas Train,” continues her fascination with the darker side of the yuletide, here with a modern interpretation of Santa’s evil, punitive counterpart, the Krampus.

Lulu’s Downstairs quickly burst into local consciousness this year with the high-powered booking of Camper Van Beethoven and Cracker, two groups helmed by singer/songwriter/writer/mathematician David Lowery, both functioning as alt-rock royalty in their own right. Lowery turned in a pleasantly irascible take on the holidays on Cracker’s 2002 LP Forever with “Merry Christmas Emily,” a rollicking and infectious track that recalls those classic holiday feelings of drinking cheap wine and yelling at each other from the middle of the street.

Pianist and composer Steve Barta, whose arrangement handiwork was heard when the Colorado Springs Philharmonic performed his reimagining of Claude Bolling’s Suite for Flute and Jazz Piano Trio in November, has five Christmas recordings available, and two of them have been in my own holiday rotation for a couple decades. The 1993 LP Noel: A Musical Christmas Card features lovely, ethereal solo piano takes on various Christmas songs (the interpretation of Vince Guaraldi’s “Christmas Time is Here” and Barta’s original composition “Twelve Twenty-Five” are particularly superb), while 1996’s Christmas Around the World features the Palmer High School Chamber Singers and, as its name implies, presents arrangements of a diverse set of carols spanning more than five centuries.

Finally, the collected work of guitarist/singer/songwriter Chuck Prophet, who was a standout at the 2019 MeadowGrass festival, is worth digging into any time of the year, but to my mind his 1995 LP Feast of Hearts captures the mixed emotions of the winter feast, and the ballad “New Year’s Day,” from 1997’s Homemade Blood, is a beautiful, ragged way to mark the passing of the year. Happy holidays.