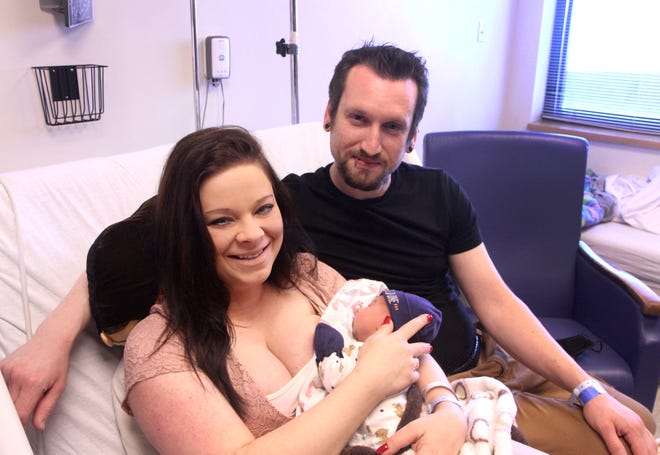 Editor’s note: The Fort Collins Coloradoan is able to provide exclusive local news thanks in part to its more than 22,000 subscribers. Now through Jan. 4, new subscribers can receive a year of news from the Coloradoan for as little as $39. Support local news today at Coloradoan.com/subscribe.

The first baby to be born this year at UCHealth Poudre Valley Hospital held out for 2021.

Jasper Lamb Fronsee was due on Christmas Day, his parents Carly and Jeff Fronsee, of Fort Collins, told the Coloradoan during a video chat Friday morning. But the final days of 2020 ticked on by before the 6-pound, 10-ounce, 19 inch baby boy — who they’re calling Jazz — finally made his appearance just after 3 a.m. on New Year’s Day.

Carly said she was glad he waited.

In addition to the obvious struggles of living life in a global pandemic, pregnancy during that pandemic as well as Colorado’s largest wildfire in history brought its own set of challenges and was “a little lonely,” Carly said.

“It was a lot,” she said. “It wasn’t what I pictured pregnancy to be. I figured I’d be going to mom groups with a big belly and going out to get a cheese dip with people after.”

Instead, her virtual labor classes and virtual connections with other moms-to-be from around the country became her support group — something Carly said helped her feel less alone.

As the Cameron Peak Fire raged west of Fort Collins and filled the air with thick smoke and ash, Carly had to stand line outside for doctor appointments, hoping to get inside and out of the smoke as quickly as she could.

Jeff couldn’t come to her appointments in person, something the couple said was “disappointing.” Instead, he’d join by video chat and wait in the car or go get groceries to pass the time.

The first time he got to see Jasper on an ultrasound was New Year’s Eve.

Jeff said they’re hoping 2021 will be a smoother year.

But he also noted the resilience and flexibility 2020 taught them to have.

“We’re getting used to rolling with the punches,” he said. “Whatever this year brings, hopefully we’re ready for it.”

As they settle into life as a family of three, Carly’s thankful for a job that will allow her to spend more time at home with Jazz — even after the pandemic.

After learning she was pregnant, both Carly and Jeff changed jobs. Jeff moved to a position in housekeeping and as a chef with UCHealth. Carly, who worked for a financial firm in downtown Fort Collins previously, now has a fully remote position doing accounting work from home.

“We just get to stay at home, don’t we, Jazz?” she said to her little boy.

It wasn’t all bad:Here are some of the bright spots we captured in 2020

‘A blessing all around’

Amanda and Tyler Weitzel knew their second child would likely be born in the early days of 2021.

Amanda, a fifth grade teacher at Jackson Elementary School in Greeley-Evans District 6, and Tyler, a truck driver, found out they were pregnant “right in the middle of COVID,” Amanda said.

The Eaton couple’s due date was Jan. 7, but about 11 a.m. on New Year’s Eve, they went in for a doctor’s visit. Their baby girl wasn’t moving as much, and the doctor encouraged Amanda and Tyler to have an induction.

They headed to UCHealth Medical Center of the Rockies and about 12 hours later, at 12:46 a.m. on New Year’s Day, the family welcomed Cambree Lynn Weitzel — the first baby of 2021 for UCHealth Northern Colorado Region’s hospitals, the health system announced Friday morning. The 7-pound, 6.5-ounce, 20-inch baby girl is doing great and “looks like mama,” her parents said in a Friday morning Zoom call with area media.

Their wish for her?

That she would “just become her own person,” Tyler said.

Having Cambree Lynn amid a global pandemic and as the world welcomed 2021 after the long year that was 2020 has “been kind of a blessing all around,” Amanda said.

And though it’s early in her young life, she’s already a better sleeper than her older brother was, Tyler said, noting that’s “been very good for the both of us.”

Her brother, 16-month-old Caden, has been able to video chat with his little sister and is “big into saying ‘baby,’ ” the parents said.

Amanda and Tyler will both have time to celebrate their new blessing, they said. Amanda plans to  pictures to her students through her long-term substitute to announce the good news before she returns to teaching in April. Tyler said he will take “at least a week and a half to two weeks off” before returning to work.

To mark their special days, the Fronsee and Weitzel families received baskets of gifts from the hospital gift shops. They also received a “giant stuffed teddy bear from McWhinney’s multifamily communities,” according to UCHealth news releases announcing the babies’ births.

As of 4 p.m. Friday, the Coloradoan had not received information from Banner Health about its Northern Colorado New Year’s baby.

From the editor:Even in trying times, we’re truly blessed to serve Fort Collins

In 2020, more than 4,250 babies were born at UCHealth’s Northern Colorado hospitals, including more than 3,000 in Loveland and Fort Collins. Here’s the breakdown of where they were born: