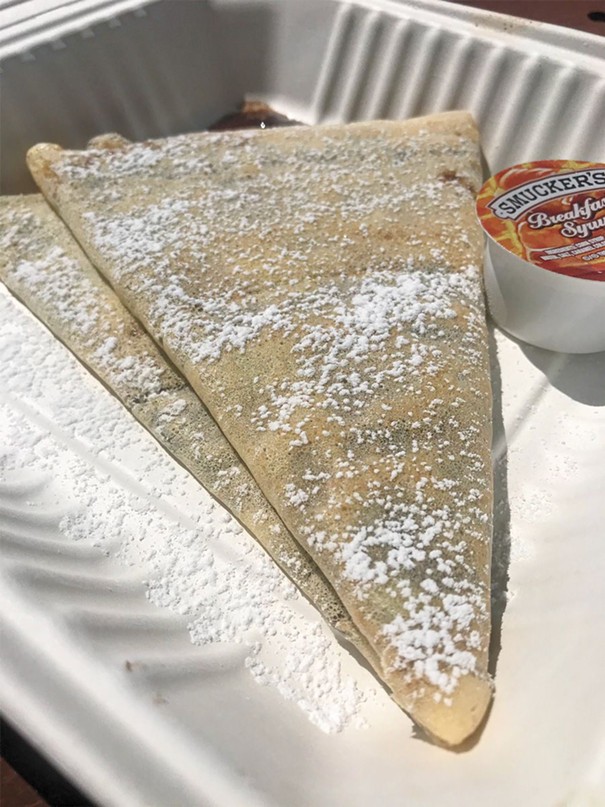 Creepy Crêpe exists as a pop-up (8 a.m. to 2 p.m., Wednesdays through Sundays) inside Black Forest’s R&R Coffee Cafe, but owner Will Bonnichsen has a GoFundMe page live, hoping to expand into catering with a food truck.

The former maintenance supervisor says the inspiration for the business came from watching anime, where characters often eat crêpes. He didn’t like crêpes as a kid, but when challenging his palate as an adult, the cook session went so splendidly he was encouraged to launch the biz. And the name? “I like creepy things and my aunt calls me a creeper,” he says. “But she’s creepier than me,” he offers in defense.

The Tim Burton-esque logo/character on Creepy Crêpe’s menu is named Crepella, and she guides guests toward five options (four savory, one sweet), of which we choose a French toast crêpe, made with two eggs scrambled into the 16-inch pancake, garnished with cinnamon and sugar, with syrup on the side.

It’s a fine sweet treat made morning dessert after we pounce on R&R’s divine BBQ Pork Burrito (single orders can be made between the two  menus).