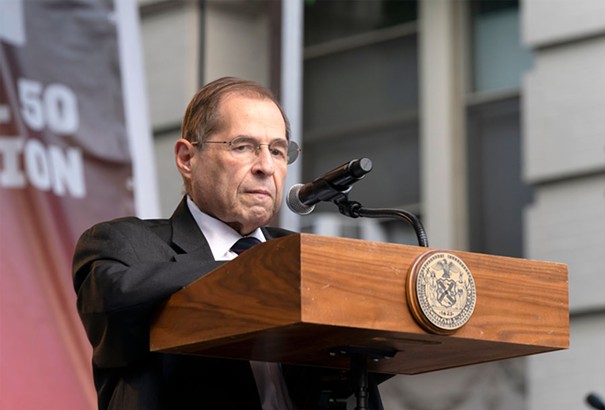 For the longest time, Nancy Pelosi was the leader of the Democratic non-impeachment camp. She said Donald Trump wasn’t worth the effort, which is, in fact, a reasonable argument. She was worried, of course, about the danger to Democrats representing Trump-won districts.

But once the whistleblower blew his whistle and Trump, against all advice, released the rough transcript of the infamous July 25 call, Pelosi and Democrats on the fence decided they had no choice. The Mueller report didn’t move anybody — the report was too challenging for most readers and Mueller was a terrible witness — but, this.

Open and shut is the obvious description of the Ukraine extortion scandal. Even the one law professor Republicans invited to testify the other day before the Judiciary Committee said he didn’t vote for Trump and basically thought that although the Democrats weren’t there yet, the investigation simply needed more work. It’s like the doctor telling you maybe you need a little more Botox.

Now Pelosi is leading the effort and insisting, in responding to a question about whether she hates Trump, that she, as a good Catholic, is praying for the president. Others say they don’t hate Trump, but they hate what he does. And others just come out and admit it. I mean, there’s hate and there’s hate. But if we’re talking in partisan political terms, the hate here is overwhelming from both sides.

Pelosi knew the Ukraine case was open and shut. Then came the testimony from the diplomats who refused to be intimidated by Trump and told the story of how the president, working through Rudy Giuliani and his henchpeople, pressured Ukraine President Volodymyr Zelensky to help Trump in the 2020 election. You know the story. We all know the story. Trump would release critical held-up military aid and agree to a much-desired White House visit if Zelensky announced he would investigate the Bidens (for no reason) and launch another investigation into the debunked fake theory that Russian disinformation on Ukraine’s supposed role in the 2016 election was somehow legit. It would have worked, too, if not for the whistleblower.

So now that we’re in the home stretch and the House is all but guaranteed to impeach — the big discussion point being whether to expand the articles of impeachment to include the very much damning Mueller Report — it’s time for another round of second-guessing.

Because one of the reasons the hearings were not as riveting as, say, the Watergate hearings is that almost all of us are confident of the ending.

Democrats on the House Judiciary Committee will vote on articles of impeachment. Meanwhile, Republican fire will turn briefly from Adam Schiff to Jerry Nadler — widely seen as an easier target. The House Intelligence Committee will keep looking to persuade more Trumpists to testify. For his part, to no one’s surprise, Trump has already signaled he will not participate in the Judiciary Committee hearings, calling them “completely baseless,” despite the fact that many of his defenders have complained that Trump has not been allowed to represent himself.

And, yes, the House will impeach. And whatever the evidence, the Senate will not convict or remove Trump. At most — at the very most, no matter how clear the scandal — a few Republican senators will jump ship.

You knew I’d get to an unless eventually, didn’t you?

I was moved to write this because of Amy Walter, of the Cook Political Report, who had another great column, this one predicting that the impeachment and Senate trial “will be more of a novelty distinction, rather than a defining characteristic of [Trump’s] re-election campaign” as far as voters are concerned in November. It isn’t to say it won’t have any impact, she writes, but probably not a major one. She’s almost certainly right. She usually is.

If there’s one thing you can count on with Trump, it’s the likelihood of dozens of other scandals and crises before November. The essential truth about Trump’s presidency is that he forces us to use up every bit of memory space — I don’t think even the cloud has enough space — and we have to dump enough information to start anew. And then our brain gets filled again. And we have to start again. You get the idea.

Certainly Trump’s base can’t be moved. As for the persuadables, however few they might be, will they still be thinking about impeachment when the time comes to cast their votes?

Let’s take, as one example, what would Trump do if the courts ruled against him, say, on turning over his tax returns? Would he simply refuse? That’s my guess. Is that a bigger constitutional crisis than sending Rudy and his friends to break knees in Ukraine?

There’s another possibility. And I wonder how Senate Republicans will play this. If they insist on calling the Bidens to testify in a Senate trial, along with Adam Schiff — as they say they might — the Democrats should say yes, if they also get to call John Bolton, Mick Mulvaney, Mike Pompeo and Bill Barr. That will never happen, of course, but it’s OK to imagine — and to imagine what the impact would be.

And yet, Trump’s approval ratings, always low, have remained pretty much the same since the impeachment inquiry ended and we’ve now moved on to the impeachment proceedings. Trump has moved on, causing yet another international embarrassment at the G-7 when the heads of state of America’s greatest allies were caught on video mocking him. He has been pouting ever since. Fortunately for him, poor demeanor is not an impeachable offense.

Clinton was impeached, and Americans, by a great majority, decided Republicans had overreached. His approval ratings soared. But Clinton is still one of three American to be impeached — Nixon quit just before the House had gotten that far — and that fact will still be in the lede of Clinton’s obit.

That’s why the Senate vote when it comes — with Republicans willingly setting themselves up to be remembered much like the collaborators in the French Vichy government are remembered — will be worthwhile. Yes, Trump will still be in office. Our democracy will still be in jeopardy. Trump could still win, the experts say, in 2020. But he will bear a mark forever. And that’s something.