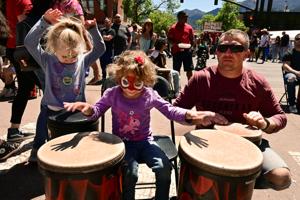 They’ve lived just blocks away from Bancroft Park in Old Colorado City for 10 years, so they know their street will be taken over by cars and people each Memorial Day weekend.

At Territory Days: Seeings lots of pineapple drinks, corn dogs, vendors and kids stopping to see what happens when someone puts money in this box pic.twitter.com/plJ3j0Ie3O

It comes with the territory of living so close to the site of Territory Days. They know to secure their parking spot in advance, stock up on groceries and plan to just “hang out” all weekend instead of braving the crowded streets to leave their neighborhood.

There was no such hubbub in 2020 and 2021, when the three-day festival was canceled amid the coronavirus pandemic.

Sitting in her front yard on Monday, Amalia Dobbins smiled while festivalgoers walked by and waved on the final day of the fest. She, along with everyone she talked to, was happy to have the sights and sounds of Territory Days back.

For Dobbins, it felt like the “the mark of the end of COVID.”

“I remember in the past we’ve been annoyed when people would just descend on our neighborhood and take up all of our parking spots and not allow us to go to the grocery store,” she said. “This year, it just feels like a joyous occasion rather than something that is a huge inconvenience. It’s nice to have some culture and life back in the neighborhood.”

The joy continued throughout the official festival grounds, which spread down Colorado Avenue, between 23rd and 27th streets.

The festival was founded to celebrate the history of Old Colorado City, which was once called Colorado City and operated as the territorial capital and center for wealth in Colorado. Territory Days has grown into a hugely popular free and fair-like event with rows of vendors selling everything from corn dogs to cowboy hats.

While some Old Colorado City businesses closed during the fest, Cucuru Gallery Cafe was open with a special Territory Days menu.

“It’s good to see the event back,” said Guillermo Alvarado, the restaurant’s owner. “People have been waiting for this.”

Outside Cucuru, lines formed for a few amusement rides and people gathered in Bancroft Park for live music.

I’m at Territory Days, where Colorado Springs band Dirty Kicks welcomed a couple guests on stage for a song. pic.twitter.com/qDDfMSEPz4

Customers also lined up to visit booths like the one belonging to Cindia Malone, who runs an embroidery business called Somebody Special Calls Me. She started selling her colorful and custom T-shirts, hats and other items at Territory Days about 10 years ago.

“It’s my favorite and I go to 50 shows a year,” she said. “It’s got to be good for me to pull a trailer all the way down from Dallas, Texas.”

Malone, as well as other vendors nearby, said the crowds appeared about the same in size as previous years.

“It brings hoards of people,” she said. “Everyone is so glad it’s back.”

That includes the Dobbins family. They usually pop over to the festival at least once per day. They shared the tradition this time with friends such as Jennie Wandfluh, who lives in Falcon and was enjoying her first Territory Days.

“We are festival people and love community,” Wandfluh said. “It’s been weird to not have that. The energy just feels very happy here.”