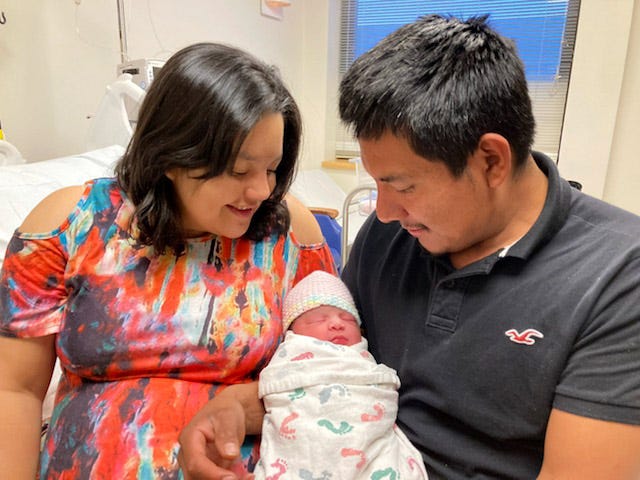 New Year’s Day was more than just the start of a new year for Fort Collins residents Jeydi Romero and Francisco Sanchez.

Their daughter, Lucia Sanchez Romero, became UCHealth Poudre Valley Hospital’s first baby of 2022. Her birth came on the same morning Fort Collins woke up to a blanket of snow after the first significant snowfall of the season.

While having a New Year’s Day baby is special enough on its own, the several inches of snow meant that Francisco, who works for a private company doing snow removal, had to leave his daughter and Jeydi’s side to get to work clearing parking lots and sidewalks at commercial businesses.

“It was really difficult because of the time of the snow was falling,” Francisco said through an interpreter. “It was a good moment for her to be born, but it was a really bad moment for the snow to be falling down.”

The Fort Collins couple, who is in a free union relationship, said Lucia has a 6-year-old big brother, Jeydi’s son and Francisco’s stepson.

Lucia was born at 7:17 a.m. Saturday, weighing in at 6 pounds, 5 ounces and measuring 20 inches. She’s named after Jeydi’s dad, Lucio.

New year:Here’s how much snow Fort Collins, other portions of Colorado got in New Year’s Eve storm

When asked what she would want the community to know about Lucia, Jeydi said through an interpreter that she is “grateful for the country that she’s born at because she will have opportunities in life.”

Francisco said he would want the community to know that Lucia is “a really beautiful baby. She has a face just like mine.”

Because Lucia was the hospital’s first baby of 2022, her parents were given a basket of baby presents from Poudre Valley Hospital’s Bella Boutique gift shop and a gift from one of the hospital’s previous families.

In 2021, more than 4,540 babies were born at UCHealth hospitals in Northern Colorado, including: