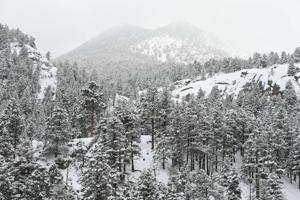 Winter doesn’t officially begin until Saturday, yet the amount of snow dumped across the Front Range over the last few months suggests otherwise.

Since the season’s first snow storm in early October, more than two feet of snow has been recorded in Colorado Springs – nearly triple the amount of snow recorded last fall, according to the National Weather Service in Pueblo.

Monday’s storm – which brought between 3 to 5 inches of snow to the city – was the latest in a series that has brought an early onslaught of frigid temperatures and wet conditions to the area. Between July 1 and Dec. 15, the weather service recorded 23. 1 inches of snowfall in Colorado Springs.

Though last year was wetter – with a total of 28.5 inches of recorded snowfall – only 9.4 inches fell between July and December. In just a few months, this season’s snow accumulation has exceeded 2017’s yearly snow total of 21.6 inches, according to data from the weather service.

As of Dec. 13, the city already had exceeded its $1,325,000 budget allocated for snow removal efforts this year by $100,000, said city spokeswoman Vanessa Zink. Expenses accrued following Monday’s storm were not included in the calculation, she said.

The annual budget for snow removal is based off “typical” snowfall, Zink said, explaining that the city cannot predict nor budget for catastrophic hail storms, wind damage or other significant weather events.

“Since snow removal plays a vital role in public safety, a city priority, we do not place budgetary limits on what is necessary for this critical service. This overage will be covered by cost savings in the overall operating budget from other divisions of Public Works,” she said.

Most students had a snow day Monday as snow and ice covered the roads. Flurries tapered off by mid-morning, though roads remained slick with temperatures hovering in the upper 20s.

Meanwhile, more significant snow totals were recorded in the mountains north and south of Colorado Springs. Near whiteout conditions caused several high country passes, including Interstate 70, to close and several delays due to poor visibility.

But skiers brave enough to face the storm were rewarded with 2-plus feet of snow, with 36 inches of snow recorded at Loveland Ski Area, 37 at Breckenridge and 38 at Wolf Creek, according to Colorado Ski Country.

With all this early snow, can Colorado Springs expect a white Christmas? Another storm is indeed poised to hit Colorado around Christmas as a strong system moves in from the west, said meteorologist Steve Hodanish. Expected snowfall is still unclear, he said.

Through February, the National Weather Service predicts a 40 percent chance of above normal snowfall for Colorado Springs and southern Colorado.