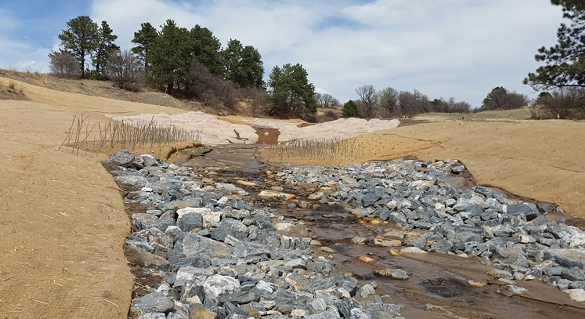 Development within the city’s northern reaches has caused “costly infrastructure damage” to the Air Force Academy’s drainage ways — a cost that “should not be borne solely by the Academy,” according to a recent letter from the Academy to the city’s stormwater manager Richard Mulledy.

The letter comes on the heels of several similar letters in response to development proposals in which Academy officials bemoaned the city’s lack of stormwater controls, which have caused stormwater to overflow onto Academy property. The city has either approved those projects or they remain under review.

But the Academy’s concerns coalesced in its December 23, 2019, letter from Air Force Col. Brian Hartless to Mulledy, in which Hartless noted:

…the cumulative effect of all new and proposed development will be a significant alteration of the volume, duration, and frequency of stormwater events conveyed across the Academy’s eastern boundary. Furthermore, this situation is being replicated in virtually all of our other eastern drainage ways….

The letter goes on to note the city’s Drainage Criteria Manual requires developers to release stormwater at “historic rates” and that downstream drainage ways undergo stabilization as necessary.

In other words, the problems being caused by the city’s continual approval of development in areas within the city limits, which border the Academy, should be dealt with by the city, not the Academy.

“Unfortunately, the Academy’s experience is that little to none of this is being implemented or enforced along our property boundary,” the Academy’s letter says.

Mulledy tells the Indy in an interview that problems stem from development that occurred prior to adoption of the manual in 2014, the first update since 1991.

“What’s happened to the academy, things have been developed over decades and we didn’t have full spectrum detention,” he says. (Full spectrum detention is that which holds back water from drainage ways and releases it gradually, so as not to overwhelmed channels.) “That wasn’t a requirement until 2014. Since 2014, we’ve always made them [developers] do it. Even though you have detention [requirements] back in the older criteria, you still ended up with impacts. Those impacts may be miles away and don’t show up that day and may show up 10 years later.”

He adds, “What we’ve always required developers to do is build and implement detention on their site and do channelization to city limits. But the city doesn’t believe it can require a property owner to do work on federal property.”

Mulledy says the city has worked with the Academy to construct stormwater projects. He also plans to meet with Academy officials soon to “continue to develop that relationship,” though he says he hasn’t yet responded to the Dec. 23 letter.

Noting the runoff that empties onto the east side of the Academy ultimately flows into the city, Mulledy says, “Of course we want to mitigate that. It’s in our best interest to make it right.”

One example of the city’s efforts is on display via the Monument branch, part of a larger project that Mulledy says is about half-complete.

It’s worth noting the city is entangled in a lawsuit filed by water quality regulators, including the EPA, in 2016, alleging the city failed to provide adequate stormwater controls and granted waivers to developers giving them a pass from installing such controls. Mulledy says the issues raised by the Academy don’t involve any such waivers and that developers in that area have always met city-imposed criteria.