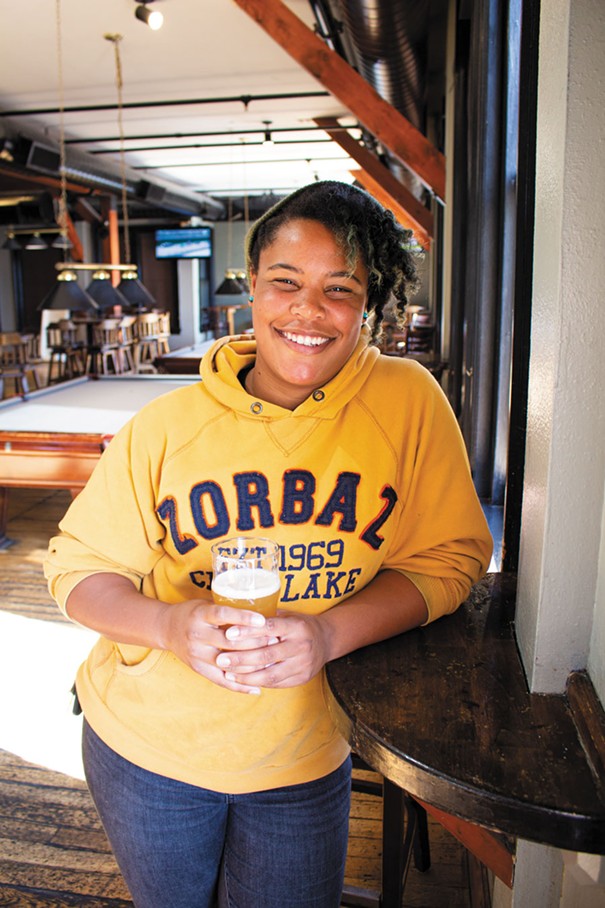 It’s three years since she chose beer, and Turner, 28, is now part of the small-but-growing cadre of women brewers in the United States.

Three weeks into her role as assistant brewer for Phantom Canyon Brewing Company, she talked with Indy sister publication the Colorado Springs Business Journal about falling into the industry, supporting women in brewing, and learning to love IPAs.

You’re not from the Springs — tell us how you got here.

What drew you to training?

Sports and always hurting myself. I feel like the story’s similar for everybody — when you’re a kid playing basketball or volleyball, and you jam your fingers, and you Popsicle-stick it — even that, to me, was so interesting. My mom was a massage therapist … she had a medical dictionary, and I would just read through that. Eventually I figured out I like helping people a lot. I have hurt myself so many times that I can care for basic things pretty easily, and I love sports, so why not put them together?

Did you work as a trainer?

I graduated and had some job offers, but decided not to do that. I was certified; I just never actually worked in the industry. I got into beer randomly, and had to make a choice. One [path] was going to be more expensive, and I wasn’t going to get much money. And the other, I would still learn things — but get paid. So I ended up choosing beer. I worked at Revolution [Brewing] for two years, then worked at another brewery for a small stint — but they didn’t have a brewing license, so they went out of business. Nobody realized it until a distributor one day was like, “Hey, I just don’t see your brewing license number on here…” and they were like, “Our brewing license what?” So they went out of business. I stayed in production and front-of-house at Revolution until six months after that.

How did you first get into beer?

I was in school, I was working at an Irish pub, and we had to learn about all the different beer styles. I tried an [India Pale Ale], and I was like, “This is terrible — I don’t know why people like this. This is horrendous.” But having to sell it, I figured there’s something in it; people like it for some reason. So for a week straight I forced myself into drinking IPAs. And it turns out eventually you do like them. And then just on a whim — I think I was studying and I was a week away from taking my board certification for athletic training — I was like, “I still need a better job than this, why don’t I apply to one of the biggest privately owned breweries in Chicagoland? There’s no way I’ll get it” An hour later, I had a message: “Hey, we’d love to interview you.” A week later, I got the job on the spot. I just liked beer and I happened to fall into the right place. It wasn’t an ultimate plan at all. I didn’t homebrew. I always thought beer was cool, but it just happened — and I was so grateful.

So they trained you?

They trained me for front-of-house. So I was a host, a server, a pastry chef, a busser and an event specialist. And one of the brewers there, I asked him so many questions he was like, “Just go hang out with my friend” — who had an internship there. So I went to learn from him initially, and that was at the brewery that’s now defunct. When they went out of business, I was still working at Revolution and they said, “Hey, we have a spot on production. If you want, you can do everything else you’re still doing, but also come work production.”

What do you love about it?

About beer? Learning. You would think beer is simple: We have Coors, we have Miller Lite… But there’s so many factors, and we’re still discovering things. We’re even discovering new yeast strains — well, “new” from hundreds of years ago, that we’re just now getting into. Anything that I can’t ever learn everything about is interesting to me. If you can eventually know everything, I don’t see the point. Or if you’ve gotten to that point — why stay?

Do you have a mentor?

I don’t think I’ve had a specific mentor yet, and I know it will happen one day. But so far I’ve just been pulling from different people and I kind of enjoy that, because I’ve seen a lot of people mimic their mentor way too much — and then they don’t have their own personality; they don’t have their own thought process. Why not choose all the best things from all these people that I’m meeting, and learn from them? If I did have to give credit to one person who I hold in high regard, it’s Matt Voelker with Tribes Brewing Company in Chicago. He would always answer any of my dumb, dumb, dumb questions. I’m sure he was like, “Why?” But at the same time, he gave me that shot.

Coming from Chicago, there’s no comparison in size. But what are your thoughts on the brewing scene in Colorado Springs?

Initially I came here and I thought it was pretty small. In Chicago, in almost any neighborhood, you’re within walking distance, stone’s throw to a brewery. … So I came here and I was like, “I have to drive to all these places? There aren’t 15 breweries within this area?” But distance-wise if you’re driving or if you’re taking a Lyft or an Uber, it’s really not that bad. The amount of breweries is good and because of that, it’s getting competitive. If you’re not doing well, people aren’t going to support you. Sure, you have your regulars, but all of the Springs is always growing, so you can’t survive on your regulars. There was one brewery, they opened their doors six months ago and they closed their doors five months ago. … Even that — it shows you can still homebrew and open up a place, but you can’t expect to be immediately successful. All your friends are going to tell you your beer tastes great because you’re giving it to them for free. But this article I read, the author said, “Charge your friends. Now see how much they like it.” Seriously — because that’s what you’re doing to the public. So I think it’s fairly competitive here, but it’s also very friendly between breweries. We share information, and that’s a worldwide thing. … You’re looked at very oddly, if you hold anything back, because we’re all trying to grow.

Do you see a positive movement toward supporting women in brewing?

There’s a group called Pink Boots Society. It’s worldwide, and it’s [for] any female who does anything in the beer industry … . They constantly have scholarships available for every facet of the beer industry, and there are chapters for each major area. We meet up quarterly, and discuss “Hey, how do we get more women coming into this, or more women empowered in the industry? How do we support ourselves and other women?”

What do you think is the key to bringing more women in and up?

Just making them feel included. There’s so many times — “mansplaining” is a terrible word maybe, but also it’s very real. If somebody doesn’t know what I do, they will immediately explain to you what you’re supposed to know. And I think it’s hilarious to sit there and wait until they’re done speaking to let them know, “Hey, I do know some things. I am in the industry.”

What are your goals?

Short-term goals: to brew more. I’m just starting. I’ve got the cellar under control and now they’re bringing me up to the hot side so I can learn. And also to continue studying. I used to study all the time and now I’ve found all the adult reasons for, “I don’t have time for that.” But that’s how I learn — not just by apprenticing; not just doing. Doing is so helpful but I’d like to learn things and bring it up with my co-workers: “Hey, maybe we should try this.” Because right now I’m only learning what they know, and they don’t know everything. …

My long-term goal is to be a head brewer somewhere with like, five people under me — a really good crew.

What else should we know?

I think most people think the beer industry is very competitive, like: “We don’t want this brewery to succeed because if they do, we’re not going to.” But I think it’s really important that everybody supports multiple breweries, because it keeps the entire industry growing. Yes, we are competitive but it is unbelievably friendly. In the industry, I have almost never felt unwelcomed from any person, male, female, transgender — every person has been so inclusive to me. I don’t feel like I get judged like in many other aspects of being a woman, being a black woman. … It’s just a very inclusive nature in this industry. It’s when you get out of the industry that you start to see it fall back.