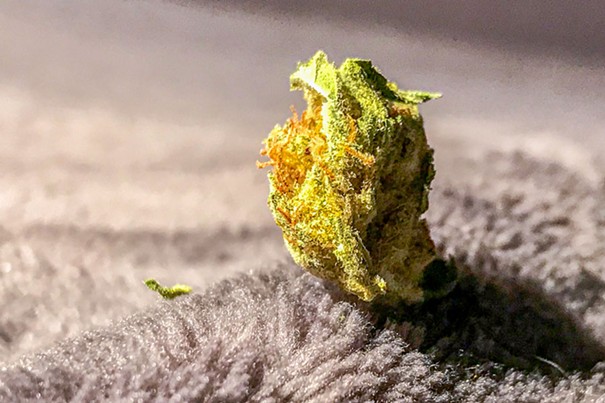 Sometimes when people ask what CBD feels like, I tell them it reminds me of the feeling after you’ve had one beer. You’re not drunk, not even buzzed, but you are slightly looser and more relaxed.

A number of studies have shown that low levels of alcohol in the blood — generally about 0.02 percent — can enhance performance in certain fields. Booze is banned in archery not because of the seemingly obvious danger of a drunk person shooting an arrow, but because it is a performance-enhancing drug in a sport that requires steadiness and relaxation.

Some weed strains, especially Sativa-heavy ones, have the opposite effect, making you self-conscious. One of the first times I smoked dabs was before a wedding I had to officiate (yes, I do that). I arrived and realized I would have to do something serious to regain the extroverted self-assurance I needed to carry out my task. So, I downed about three beers to force myself out of my head. But other CBD- and Indica-heavy strains can have a high that borders on a buzzing drunkenness.

Aliens on Moonshine is one of these. It is a ridiculous but apt name for a strain and it would be a spectacular title for a film about a crew of shipwrecked aliens who become drunks and team up with moonshine runners — a sort of sci-fi Thunder Road.

The buzz brought about by these small-ish, dark green buds is a woozy, warbly high not entirely foreign to a drinker of moonshine or a sipper of cough syrup. Its mental space calls for a soundtrack of DJ Screw. It is a cross between White Moonshine and Sour Alien. But even though it’s an Indica, it has pretty hefty amounts of pinene and limonene, two Sativa terps that increase energy and focus, so the sensation booze-wooze also comes with the kind of focus that can help with pool or darts.

There’s something nice in all that, but it also feels a little confusing, what my colleague Brandon Soderberg calls “weed maximalism,” where there are just too many contradictory things happening in the high. Also like booze I guess, it’s kind of bewildering and disorienting after the initial relaxing elation. It led on more than one occasion to a nice nap.

The flowers have a fruity, overly sweet flavor like homemade muscadine or elderberry wine hidden inside a honeysuckle vine. It doesn’t carry the flavor well into combustion, and its smoke is kind of flat and flavorless. The little runty buds with big leaves curling around them aren’t much to look at either. But they do pack a punch like a little alien in a bar fight — and if you smoke some and have some money and get feeling groovy and decide you want to make an alien Thunder Road, hit me up.

Freaking out when a crazy person approaches you: 3