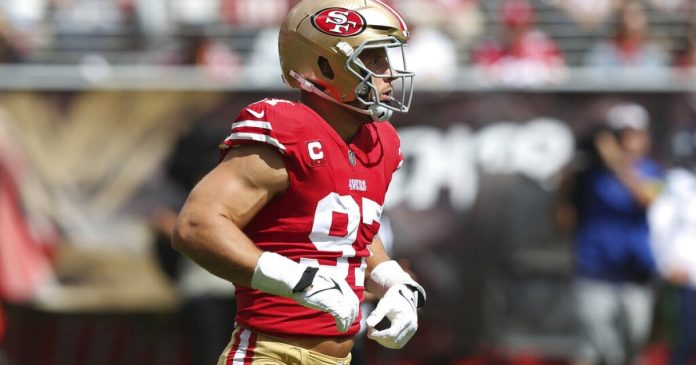 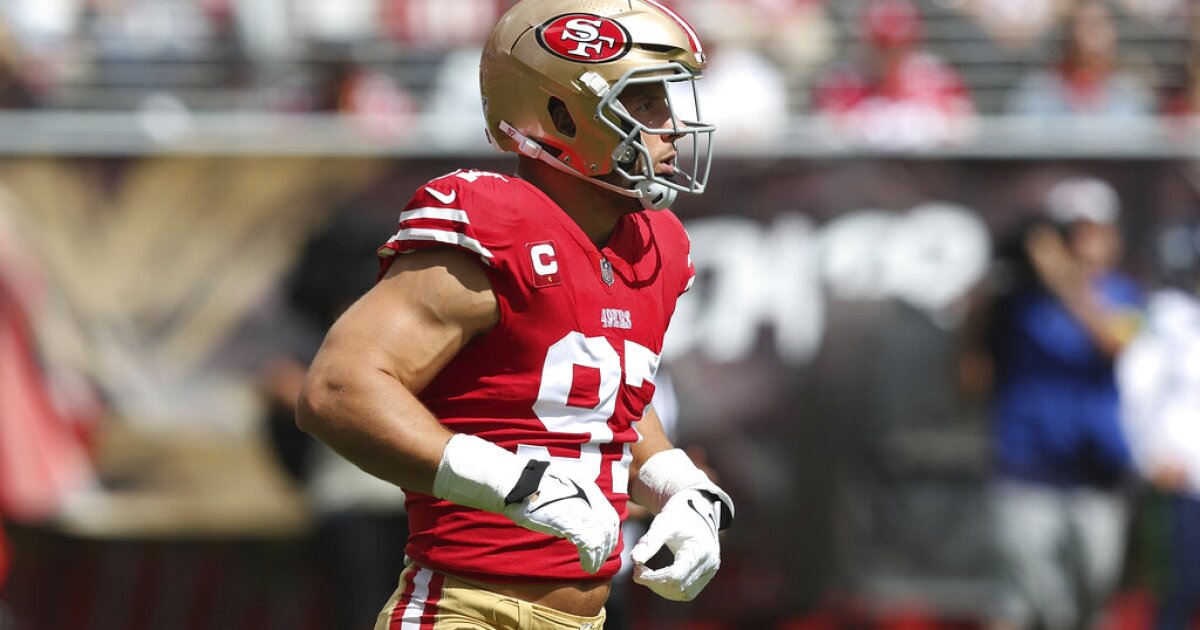 ENGLEWOOD — Through two games, the Broncos boast fascinating statistics. They lead the league in penalties, rank dead last in red zone touchdown percentage, but run the ball well and their defense has not yielded a touchdown in six quarters.

So the question lingers entering Sunday night’s primetime game against the San Francisco 49ers: Are the Broncos thisclose or completely lost with delusions of adequacy?

After splitting with a pair of underwhelming teams — Seattle and Houston — the schedule becomes less forgiving. The 49ers represent an NFC title contender, and became better with proven veteran Jimmy Garoppolo replacing the injured Trey Lance. This sets up as a bare-fisted, brass-knuckle brawl. Throw down the sawdust and find out who is tougher and more disciplined.

The Broncos have a path to victory, but must play significantly better. My Denver7 keys to an upset:

Control the clock
When the 49ers win time of possession, they win. It’s what they do, a reflection of their rugged running game. It is a defining characteristic of coach Kyle Shahanan’s teams, pulled from his father Mike’s days leading the Broncos.

“Yeah, man I think it’s the commitment to it. You get what you emphasize, and we emphasize it a lot,” Shanahan said. “I feel like the only time you are successful and truly winning games is when you can depend on that run game and make people scared of the run game. And if you do that everything else becomes easier.”

The 49ers lead the league in time of possession at 35 minutes, 24 seconds per game. That number needs to be closer to 30 minutes for the Broncos to succeed.

Slow the run game
The 49ers are going to run, and they don’t care if you know. Their ground plays feature nine players doing the same thing every time and two creating variations with motion and blocking to steal eyes away from the prize. It is usually the fullback, receiver or tight end showing elasticity. Can nose tackle D.J. Jones’ insight help the Broncos steal some cues — like Trent Williams’ tips on his stance on run and pass plays — as the Broncos hold the 49ers to roughly 110 yards on the ground?

Don’t run from the truth
The Broncos lack balance in the red zone. They have thrown a league-high 17 passes inside the 20-yard line, completing just two of their last nine attempts. They have run four times for two yards with two fumbles. Want my advice: Keep it simple inside the 5-yard line, and give the rock to Javonte Williams or Melvin Gordon. The onus is on Hackett and Russell Wilson to make the attack diverse.

Tackling the tough issues
One of the most lopsided matchups on the field is easy to find: edge rusher Nick Bosa vs. right tackle Cam Fleming. Fleming has done his best, but his bad plays have resulted in lost yardage and sacks. Bosa is a terror on the outside and will move around to create better matchups for others. Left tackle Garett Bolles has done fine, and will be opposite of Bosa some. But Fleming must avoid big whiffs for the Broncos to stay on schedule and win the turnover battle.

High and tight
The return of linebacker Josey Jewell to pair with Jonas Griffith will help the Broncos’ rush defense. But the Broncos, like many clubs, are vulnerable with their backers in coverage. It showed up against Seattle, and the 49ers will aim to get tight end George Kittle involved in his anticipated season debut. Kittle excels at blocking, but is a threat to gash any defense. The Broncos must pick and choose how their backers cover him, and don’t be afraid to get help from safeties Caden Sterns and Kareem Jackson and even cornerback Pat Surtain II, if he plays as expected.

RussellMania arrives
The Broncos gave Russell Wilson a $245 million contract extension to make magic out of messes. This needs to be the week he shows mobility, and colors outside the lines with a couple of huge scramble pass plays. Most likely, it means breaking loose and finding Courtland Sutton for a chunk.

Not so special
The Broncos kept inexperienced punter Corliss Waitman over Sam Martin because of his booming leg. It has not worked out through two weeks. The Broncos rank 30th in gross punting and 31st in net. Special teams coach Dwayne Stukes called the results, “sickening.” They need Waitman to flip the field with the driver and improve dramatically with kicks inside the 20.