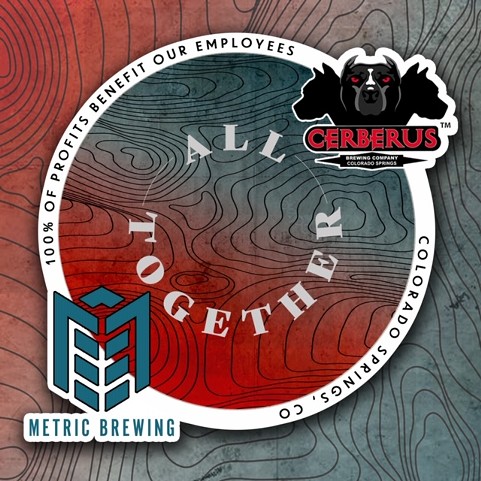 Ahead of the weekend, here’s a grab bag of current food and drink news:

• Cerberus Brewing Company and Metric Brewing are releasing the collaboratively brewed All Together IPA this weekend to support employees at both companies. (All profits will go directly to them.) The idea hails from Other Half Brewing in Brooklyn, New York, and according to a release put out by Cerberus, nearly 600 breweries across 41 states and 39 countries are making this beer.
“There is an inextricable link that binds together everyone in the hospitality industry. Brewers, servers, bartenders, bussers, dishwashers, GMs, buyers, chefs, owners — we are all in this together,” reads a statement by Other Half Brewing. “In this industry, when one of us struggles, the rest of us pick them up. It’s baked into who we are.”
The New England-style IPA features a blend of Apollo, Mosaic, Wakatu, Simcoe and Citra hops and comes in at a more than sessionable but less than imperial 6.5 percent ABV. The beer’s recipe is open source and its name and artwork are free to use for any brewery wishing to participate.
“As much as this is about raising money, this is also an exercise in awareness so that local communities can understand how daily life has been upended for those that rely on social gathering to make a living,” the release notes.
Crowlers will be available on Saturday with limited-edition stickers gifted to buyers as a small gift of appreciation. Relatedly, Metric recently collaborated with local graffiti artist Paes164 on some slick new crowler labels — check these out:

• Also in beer haps: FH Beerworks has launched neighborhood deliveries via a new online ordering system. See details on their Facebook page, and check out this below graphic to match your neighborhood with delivery days:

• In Side Dish, we recently reported on Red Gravy chef Eric Brenner‘s newly conceived Meals to Heal program, aimed at feeding frontline healthcare workers while stimulating restaurants financially. Other local restaurants have launched some cool community efforts as well; here’s just a couple that we’ve noticed recently: Phantom Canyon Brewing Co. created Extra Helpings, which allows buyers of one meal to gift another to someone else in need for free. And the recently opened ViewHouse has conceived the 200 Meals a Day program, to donate as many meals each day to “local organizations in need that are affected by COVID-19.”