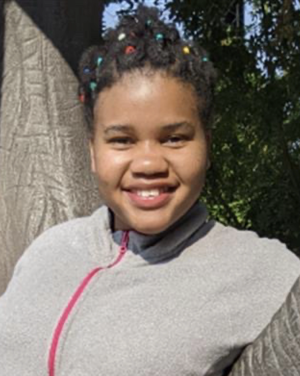 The Aurora Police Department is asking for the public’s help in finding a 13-year-old Aurora girl who has been missing since Tuesday afternoon.

Ta-Kyrah left her home around 1:30 p.m. Tuesday and has not been seen or heard from since, according to police.

Police originally said they thought Ta-Kyrah ran away from home, but now police believe she may have been abducted. Police said the change was “due to suspicious circumstances” but have not provided any details.

The Colorado Bureau of Investigation issued a missing endangered person alert for Ta-Kyrah Wednesday morning when she did not come home overnight. An Amber Alert for abducted children was issued just before 3 p.m.

Ta-Kyrah is 4 feet, 9 inches tall and weighs around 150 pounds. She was last seen wearing a green and black sweatshirt and white floral pajama pants.

Police are asking anyone who lives in the area to check footage from exterior security cameras between 1:30 and 3:30 p.m. Tuesday. If there is footage that possibly includes Ta-Kyrah, call Aurora police at 303-627-3100.

Anyone who sees Ta-Kyrah or has information about where she might be is asked to call 911 immediately. To be anonymous, tipsters can call Metro Denver Crime Stoppers at 720-913-7867.