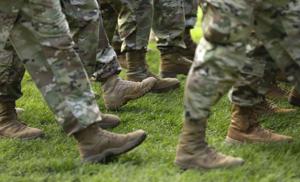 The military is still beloved and admired, but a survey released this month by the Reagan Institute should sound alarm bells in the Pentagon.

Sure, 56% of Americans say they have a great deal of trust and confidence in their nation’s military. But that number has slipped from 70% in 2018.

Worse, two key groups who will decide the military’s future are less than enamored with those who serve in uniform. Just 38% of Americans under 30 give the military top marks along with 44% of African Americans.

Defense Secretary Lloyd Austin dropped by Colorado Springs on Wednesday to learn more about the military’s efforts to combat coronavirus, but …

The issue for the Pentagon is that those young people in 20 years or less will be the parents counseling their kids about military service. And when those parents sour their kids on heading off for basic training, the military will turn to its other ripe recruiting grounds in minority communities. If the minorities have soured on the military, too, service branches, especially the Army, will be in trouble.

So why are those groups turning their backs on the military? One possible reason: 20 years of war.

The military headed into combat shortly after 9/11 and while casualties are exceptionally low these days, there are still thousands of troops overseas.

And what the public has seen in 20 years of war has involved more sacrifice than celebration.

The war in Iraq was a mess from nearly its inception, and Americans are still battling Islamic State terrorists because of the military’s shortcomings there.

Action in Afghanistan was planned to strike a blow against international terrorism and Osama Bin Laden in particular. But U.S. troops have spent most of their time there policing a civil war between Taliban loyalists and the U.S.-back government in Kabul.

And now, Americans are waking up to the larger threats our nation faces, the Reagan Institute survey found.

More than a third of Americans view China as the greatest threat the nation faces, while 16% say Russia fits that bill.

In either case, Americans are more wary of nuclear-armed rivals.

And given the military’s track record in the past two decades, people have reason to be skeptical about the Pentagon’s ability to face those threats.

The Pentagon can turn things around. The military demonstrated that ability in the 1980s when America was still reeling from the debacle of the Vietnam War.

The military came up with new ways to fight and win on the battlefield with high-tech weaponry and at the same time found a way to reach through the screen and grab the attention of America’s parents.

Military messages like “Be all you can be,” and “It’s a great place to start” saw families sending their kids into uniform so they could later head off to college and successful civilian lives.

The military lately has had some clunkers, like the “Army Strong” campaign, that aren’t going to motivate mom and dad. The troops are also still fighting with most of the weaponry they bought in the ’80s, so the military has a hard time saying it will teach young people about cutting-edge technology.

Defense Secretary Lloyd Austin has a big mission ahead. He need to fix the military and position it to win in the future while fixing the military’s image with the public.

Both tasks will require him to acknowledge the military’s failings. And that admission will go a long way on its own to restoring America’s confidence in its troops.