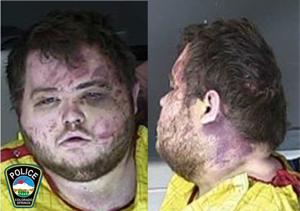 The official booking photo of Anderson Lee Aldrich was released by the Colorado Springs Police Department on Wednesday afternoon.

Aldrich is accused of killing five people and injuring another 18 during a shooting rampage at Club Q in Colorado Springs Saturday night.

The newly released photo shows Aldrich with multiple marks from the beating he took after being subdued by two patrons of the club.

Richard Fierro, 45, has been hailed as a hero after he says he reacted on instinct to help subdue the suspect.

Fierro said he smelled the acrid tang in the air, saw the muzzle flash of a firearm being discharged, and dove for cover, taking his closest buddy with him. When he saw his chance to tackle the shooter, he took it.

“I grabbed him by the back of his little, cheap-ass armor thing and pulled him down,” he said. “I said, ‘Move the AR, get the AR away from him,’ and the kid did it.”

Fierro said he managed to grab a pistol from Aldrich, and proceeded to beat him with his own weapon.

The suspect in the shooting at the popular LGBTQ+ nightclub made a court appearance Wednesday in 4th Judicial District Court. Appearing virtually from the El Paso County jail, Aldrich was slumped over in a chair with visible wounds on their face.

Aldrich’s first in-person appearance in court is scheduled for 8:30 a.m. Dec. 6. Judge Michael McHenry, who was the judge listed on the 2021 affidavit, will preside over future court proceedings for Aldrich.

Defense attorney Joseph Archambault requested that Judge Charlotte Ankeny change the first in-person court date because he may be unavailable. Ankeny said the date would remain unchanged, for now, because McHenry had no other dates available for the hearing.