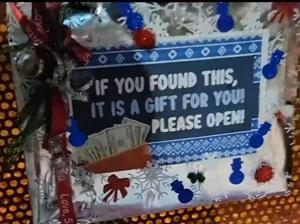 An extra dose of holiday spirit was brought to Colorado Springs this week after an anonymous gift giver known as the “Ugly Sweater Elf” started posting envelopes of cash around the city, Gazette news partner KKTV reported.

The anonymous elf went to work Wednesday placing envelopes at gas stations, on light poles and at bus stops in attempt to spark a “pay it forward” attitude around the city as Christmas approaches, KKTV reported.

The mystery elf told Gazette news partner KKTV the size of gifts would grow in coming weeks and range from cash and groceries to merchandise, and will culminate with one finale prize.

The impetus for the gifts came from the elf’s desire to give back to the Colorado Springs community, KKTV wrote.

Gift recipients included a mother of nine who needed money for gas when she found $60 wrapped in foil, KKTV wrote.

“You restored my hope in mankind, basically,” she told KKTV about the elf.