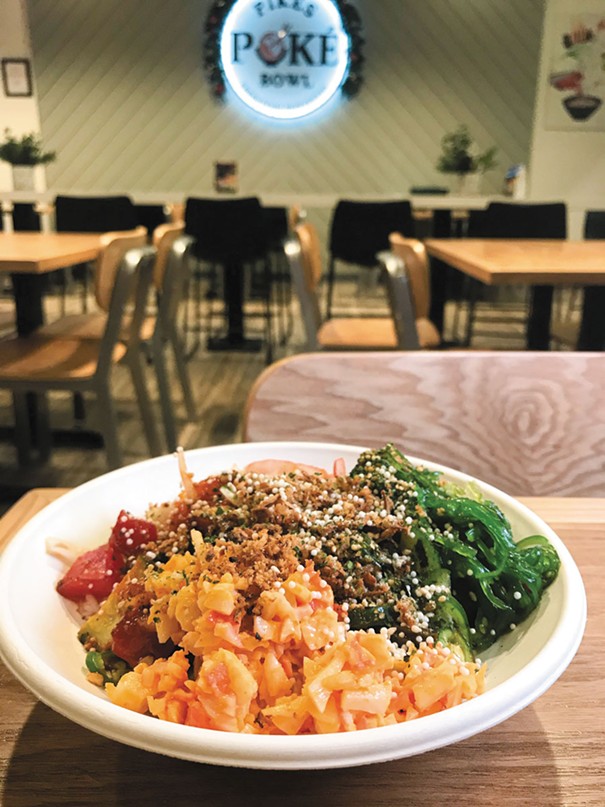 This is our first food review of 2020, and as I begin writing, I’m pondering what the year ahead holds for our local food and drink scene. Sure, we’ve had early word of some notable openings and expansions, and it’s safe to expect a surprise or two, but I’m thinking more broadly of food trends. What’s trending in bigger markets that local restaurateurs might glom onto?

Past trends — some that stuck and some that flashed and faded — included a momentary crêpe boom, tapas and Asian fusion. If Greg Howard and crew are correct about the “ghost restaurant” concept with Slingers Smokehouse & Saloon as we recently reported, we may indeed see more delivery and pick-up-only kitchens ahead. But 2018 signaled something more sure that’s already begun to unfold, and that’s the advent of poke places — sprung from Hawaii, rooted in Polynesian culture.

International Poke Company was the first dedicated place to hit the scene last spring and set a high bar for quality and creativity that others will be hard-pressed to match. Menya Ramen & Poke opened around the same time as an expansion out of Denver, clearly refined and polished and perfectly pleasant. My colleague Griffin Swartzell reported in early fall that Poké Bop, a Texas-based chain with two locations already, needs work based on his visit to the north store; the other’s downtown. Also on the Northside, Pikes Poké Bowl has just opened, and we pay a visit. (That leaves us the north-end Mama Poke to visit  — and we will, soon.) For those counting, that’s five of six concentrated northward at the moment, meaning cannibalization could reduce overall support for the culinary form.

Pikes Poké Bowl, for its part, comes via Alan Brinck, we’re told by staff. He’s the son of Sung Brinck, who has operated the rightfully successful Kura Japanese Restaurant on Research Parkway for the last 13 years. So he starts with a leg up on restaurant experience and familial know-how, and the fusion elements at Pikes Poké Bowl make even more sense considering shared touch points, like a ginger house salad dressing from Kura that appears on our Hawaiian garlic shrimp bowl, a huge mound of rice topped with salad greens, half a dozen beautifully seasoned prawns (salty, sweet, char-infused) and grilled zucchini and asparagus segments, plus pretty tomato and lemon pieces hand-carved into flower shapes.

Pikes Poké Bowl also travels to Japan, with an onigiri section — those being the convenience store-popularized triangular-shaped rice balls, filled with any number of typically pickled items. Here, we get a furikake-garnished salmon onigiri with a fold of seaweed wrapping the bottom (essentially saying “hold me here”), that’s very dry on the palate, needing a soy or sauce dip. Next we hit China and Korea briefly, for sweet, exemplary bulgogi bao buns, the sticky, airy dough wheels folded into taco shapes over the marinated beef strips garnished with sprouts, purple cabbage and lettuce.

Then back to Japan for a rich curry ramen bowl that we presume — but the staff can’t confirm — starts with a tonkatsu (pork bone) base, given its creamy texture; a table talker promotes Yamachan Ramen (an authentic, California-based noodle purveyor for the U.S.). The bean shoot- and scallion-flecked broth’s topped with a flavorful pounded, breaded strip of chicken katsu and half of a sweet soy soft-boiled egg (I’m guessing a 6½-minute boil) plus some bok choy.

But wait — weren’t we here to talk about poke? Yes, half of Pikes Poké Bowl’s menu is devoted to build-your-own bowls (ranging from $11.95 to $14.50 for between two and four protein “scoops”) and seven pre-made signature bowl options. We go for a split between a Fire Salmon and Fire Tuna poke bowl, adding squid salad and several optional, complimentary garnishes at the checkout register. That gives us a pretty robust, flavor-diverse medley that also hosts pungent seaweed salad, cucumber wheels, fried onions, spicy krab mix, and more heat from jalapeño coins, spicy soy sauce, gochujang and sesame sriracha. Yes, “Fire” is a fair name.

Poke, like sushi, almost always manages to feel light in the belly despite our typically overeating and stuffing ourselves. Especially with the build-your-own options, Pikes Poké Bowl presents plenty of ingredients for breaking out of your norm. Starch options include bamboo rice and mixed quinoa and brown rice. Proteins include tofu, tamago and octopus. Mandarin orange, pineapple, sweet corn and mango make for some of the fruit and veg choices. Dry toppings include three roe options, chile threads and kukui (candlenut tree) nuts. Still more: There are 13 sauce options ranging from ponzu and spicy or wasabi aioli to eel sauce and citrus yuzu. There are thousands of potential constructs based on your mood or whim, so for poke at least, Pikes Poké Bowl is what you make of it — they’re the food fixer, but you’re the final creator. That adaptability stands as just one more charm of poke’s framework.