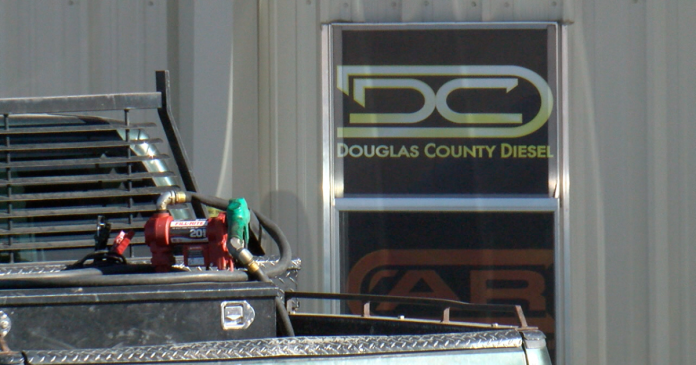 DOUGLAS COUNTY, Colo. — Another truck that was supposed to be repaired by Douglas County Diesel was discovered in a Castle Rock tow yard, and the owner says it doesn’t appear any work had been done on the vehicle.

“It’s the same, same as when I dropped it off. Same exact, nothing has been done, not a damn thing has been touched,” said Russell Lehmbeck.

Lehmbeck had his truck towed to Douglas County Diesel after having problems with the engine. The truck was dropped off in September 2018 and he hadn’t seen it since. Lehmbeck lives in Wyoming so he hasn’t been able to check on the truck as often as he would’ve liked, but he drove to the diesel repair shop in August and recorded his conversation with the owner, Chad King.

In the cell phone video, King assures him, “I ain’t going nowhere.” King can also be heard telling him the truck was at another shop but it should be back by Wednesday.

Lehmbeck wanted to know about the status of his truck but King stopped answering the phone. When he searched for the business on Google, he realized it was closed and saw some of the news stories about people who say Douglas County Diesel ripped them off.

He called another diesel repair shop and they suggested he start calling towing companies to see if anyone had his truck. He soon found out it was sitting in a tow yard across from the now shuttered repair shop.

Lehmbeck’s truck is now the second that was found in a tow yard. Back in December, Contact7 talked with a local rancher who discovered his truck was in a tow yard and it appeared none of the repairs had been made. That man says his insurance company cut an $18,000 for King.

After that initial story, multiple victims have reached out to Contact7. Another man says when he picked up his truck four months after he dropped it off, the repairs were not finished and the lug nuts on his rear driver’s side tire were not tightened.

Two men also reached out saying they had loaned large sums of money to King as part of a business deal and they were worried they wouldn’t see that money again.

“I didn’t want to believe it,” said Lehmbeck.

He says he paid Douglas County Diesel $8,5000 and that King asked him to transfer the money via Walmart. Lehmbeck was also hoping to get about $1,000 worth of tools out of the truck, but when he looked at the truck in the tow yard he said the tools are no longer there.

In the end, he told the towing company they could sell the truck for scrap because he said it has already cost him too much money.

“Being out the money that I’m out it’s not worth even fixing, I can buy a brand new truck for what I’m out,” said Lehmbeck.