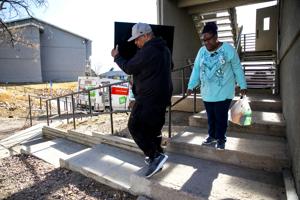 So far, environmental testing has found air quality problems severe enough to prompt three evacuation orders by the property owner forcing more than 200 tenants to relocate. An additional 829 units, not all of which are occupied, remain at risk, according to state health safety officials and El Paso County property records.

Experts have yet to conduct air quality tests to determine the safety of those units despite the state raising concerns in early October about construction practices, according to a person with ties to the property manager. That person asked for anonymity due to the sensitivity of the matters involved.

Denver-based Slipstream Properties, which has come under investigation by the Colorado Department of Public Health and Environment, did not return telephone messages seeking comment.

“The department is currently investigating whether residents at these facilities were exposed to asbestos and whether any state laws were broken during the renovation work,” said agency spokesman Andrew Bare.

“Because we are currently investigating, we’re still in the process of determining which steps need to be taken to protect the health and well-being of residents,” Bare added.

Roy White, owner of Eagle Environmental Services, said he was hired by the owners of the properties to abate asbestos for some of the apartments early this year. He said he pulled the proper state permits and complied with all state rules, laws and policies.

The owners of the properties then began feuding and sidelined him, White said. He said state health investigators recently contacted him over allegations that the property owner hired uncertified workers to conduct additional construction without proper asbestos-abatement permits or state oversight.

The person with ties to management of the properties confirmed White’s account, adding that the additional questionable construction occurred after residents had moved into apartments.

“We received a complaint and began investigating immediately,” said Bare, the spokesman with agency. “The department attempts to respond to every credible complaint related to asbestos, and in this case we moved the same week to stop all renovation work at the facilities of interest.”

At Thrive at Rockledge a construction worker told a reporter for The Gazette that properties had been vacant for months, and that he had been working on the adjacent parking lot for several weeks.

At Thrive at Slopeside Apartments, Gwendolyn Smarr said management hasn’t told her of asbestos concerns, but cited several concerns about the apartment, where she is temporarily staying with her 38-year-old daughter.

“She plans on getting the heck out of here,” Smarr said of her daughter, who lives in the two-bedroom apartment with her two children, 16 and 7.

Smarr recalled “three days of pure hell” when the heat was recently shut off in the building. Management provided space heaters in the meantime, she said.

She said her daughter often complains to management about the lack of heat – last year she went without it all winter— and strong smells of sewage in the summer.

Despite the problems, her daughter has decided to stay because of the apartment’s close proximity to her work and her children’s schools. Plus, she can afford the $850 monthly rent.

“They promise to fix things, but they never do,” Smarr said. “They’re charging people and they aren’t making it livable. It just isn’t right.”

“It’s sad, you’re jeopardizing people’s health,” Smarr said of the asbestos found at Thrive at The Incline apartments. “No one deserves to live in that situation when they’re trying to make ends meet.”

Residents at the other apartment complexes under state scrutiny said they weren’t told of potential asbestos contamination.

Daniel Hunt, who has lived at Thrive for Elevation for two years, said management has never alerted him about asbestos. When he first moved in, roaches infested his living space but management responded quickly to fumigate.

After a water leak caused his bathroom ceiling to collapse, repairmen arrived the following day to fix it, Hunt said.

The leasing manager at North 49 Apartments declined to comment about asbestos.

Three residents said management has not notified them about asbestos.

A 48-year-old resident, who asked to remain anonymous for fear of eviction, said she has called the police several times after finding homeless people living in the laundry room, a few doors down the hallway from where she lives with her three children.

The doors to the complex remain unlocked she said, allowing them to sneak inside and sometimes steal clothes from the dryer.

She moved into her apartment in May looking for a newly renovated apartment with a private access for her daughter who has a seizure disorder. She said she wasn’t anticipating so many problems considering her apartment was completely remodeled before she moved in, but has since found mold in her apartment and often smells marijuana as the smoke from  neighbors seeps in through her window.

Management has repeatedly told her that no changes can be made until she provides “proof” of her complaints, she said.