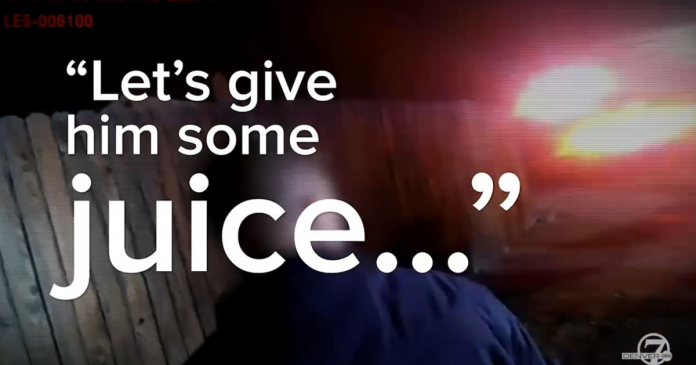 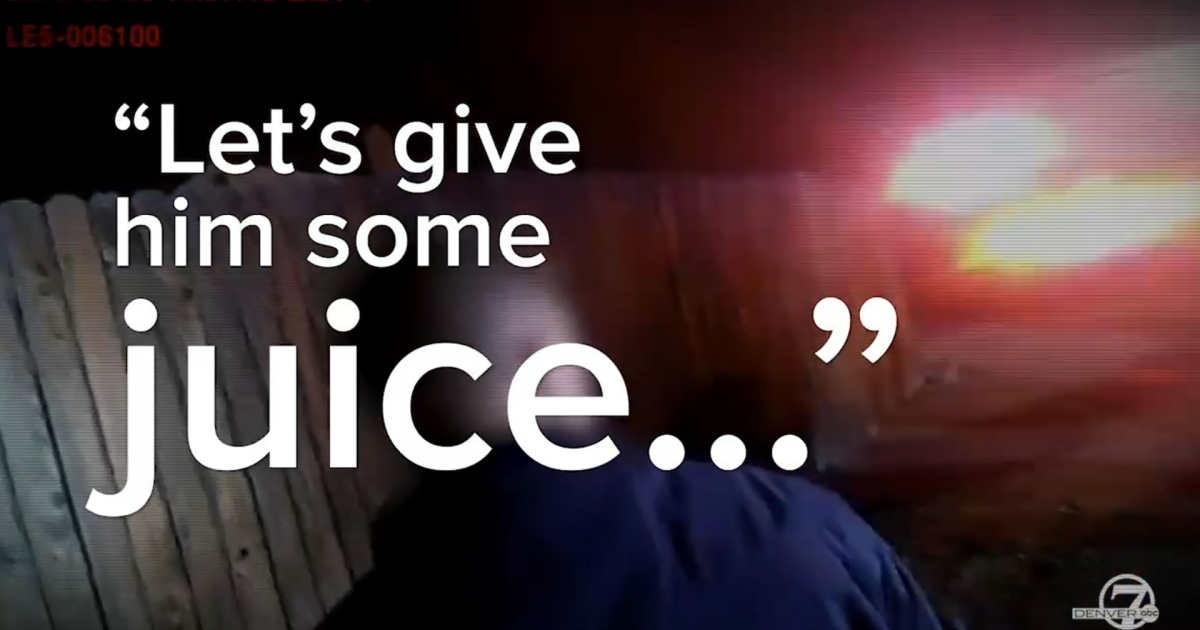 AURORA, Colo. — Newly released police body camera video obtained by Denver7 Investigates shows an officer encouraging paramedics to give sedatives to a suspect to calm him down.

It took more than three months for the Aurora Police Department to release the video through an open records request.

An officer is heard on the body camera video telling paramedics, “Let’s give him some juice to go to sleep.”

Aurora paramedics injected McClain with a heavy dose of ketamine after incorrectly estimating his weight. He would then go into cardiac arrest before dying in the hospital a few days later.

The newly released police body camera video from the March 2019 incident was recorded after two suspects got into an argument over cigarettes, which then led to a fight.

According to a police report, Aurora officers were dispatched, and as an officer was trying to search one of the suspects for weapons, another man involved in the fight approached with a golf club. The officer then drew his gun and gave verbal orders for the man to “get back,” and the man compiled.

But it’s what happened several minutes later that now has the attention of Aurora’s police chief.

Officers end up taking the first suspect to the ground, and at it’s at this point that an officer suggests the use of a sedative.

“Can we get this guy like some Versed or something and get him to calm down?” the officer says on the video.

The APD officer then turns directly to paramedics to ask again for powerful sedatives.

“Hey, can we get like Versed and calm this dude down or Haldol or something?” the officer says. “Let’s give him some juice to go to sleep. … And then we can deal with him.”

The administration of sedatives is a medical decision, and not one drug police are supposed to be involved with or supposed to be asking paramedics to perform. But within 7 seconds of the officer asking for sedatives, the video shows an Aurora Fire paramedic walk up to where officers are holding the suspect.

“Yeah. He was. He’s been Tased already,” a female officer says.

Not long after, police restrain the suspect and despite the suspect’s pleas against it, an Aurora Fire paramedic ends up injecting the suspect with 450 milligrams of ketamine.

Ketamine is a fast-acting anesthetic that quickly knocks the suspect out. The drug is regularly used in hospitals, but paramedics are increasingly using it to help police arrest suspects they feel are out of control.

“The incident with Elijah McClain about a year ago really brought ketamine to the forefront,” Gardner told Denver7 Investigates earlier this year.

He also brought into question the drug’s role in policing during the same interview.

“I have concerns that individuals without the expertise to decide if it’s the most appropriate drug to use are encouraging its use,” he said in August.

They are concerns the newly released Aurora body camera video now shows for the first time.

Ketamine expert says law enforcement should not be requesting sedatives

Dr. Ben Lawner is the medical director for the Baltimore City Fire Department. It’s his job to make sure his paramedics are using ketamine safely.

“This is certainly a subject of mutual concern,” Lawner said. “These are very difficult encounters. In our own jurisdiction, we mandate a 100% review of these calls involving ketamine.”

“My first reaction was there may be precedent in the system, maybe that could be an accepted practice. Ketamine should not be administered at the request of law enforcement,” he said.

Lawner said ketamine came on the scene in the EMS world as a way for paramedics to treat extremely agitated patients who are a risk to themselves and others. He said it was never meant as a drug to help police arrest unruly suspects.

“There are concerns when you look at the police request for ketamine,” he said. “There are national discussions going on about this.”

Aurora police and fire respond to the video

Denver7 Investigates asked to sit down with both the Aurora Police and Fire departments. Both agencies declined our request for an interview and provided lengthy statements instead.

“This incident occurred nearly two years ago, long before the national conversation surrounding the use of ketamine,” Aurora Police Chief Vanessa Wilson said in the statement.

Wilson said since she took over as chief in January, “Officers have already been reminded they are not to suggest or attempt to direct medical treatment.”

The chief called the officer’s choice of words “not ideal,” but said he was trying to get the man in crisis help in order to prevent injury to himself or other officers.

Wilson said she “understands the concerns this has caused” and that she has spoken to the officer, who she said is remorseful.

Aurora Fire Rescue said in its statement the “Aurora Police Department does not influence our decision making for treating patients,” and that its paramedics maintain medical control.

“This incident occurred nearly two years ago long before the national conversation surrounding the use of Ketamine. Under my administration since January of 2020 officers have already been reminded they are not to suggest or attempt to direct medical treatment to rescue personnel for any patient. While the officer’s choice of words are not ideal, his intentions were to get the man in crisis the assistance he needs in order to prevent him from further injuring himself or officers. It is also important to know that the sole decision to administer care to a patient belongs to the paramedic providing care, and we do not “order” medical personnel to act. I do understand the concern this has caused and have reiterated my expectations in these situations with officers. Finally, I have spoken with the involved officer and he is remorseful for his choice of words in this incident and has learned from it.”

“Aurora Fire Rescue is committed to providing professional medical care to all the community members it serves. Our paramedics are vetted through a carefully developed process not only though our department, but at the state level and national level. This certification must be maintained with continued education and additional skills that include successful completion of assessments. Additionally, our department requires training every quarter, at a minimum. While our paramedics perform medical care on scene, their decisions are based on their training and medical protocols regulated by a physician. While information gathering is an important piece of a patient assessment, Aurora Police Department does not influence our decision making for treating patients. Aurora Fire Rescue maintains medical control for the City of Aurora, in which we continue to provide exceptional service to the community by well trained professionals.”