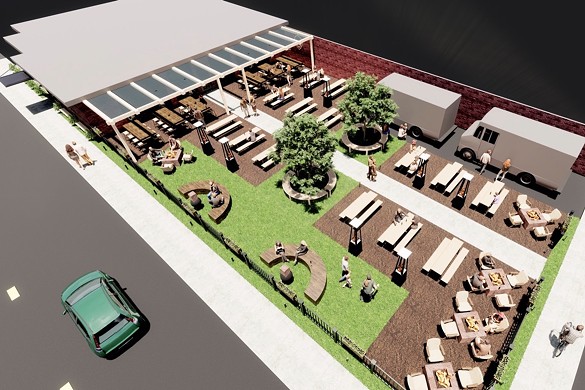 There’s no denying that downtown restaurants and retailers are feeling the pain caused by coronavirus closures, but new development in the area is still moving forward.

Case in point: A 417-space parking lot and beer garden approved for south of Vermijo Avenue, along with a new brewery planned for Pikes Peak Avenue.

The parking lot, beer garden and brewery are three separate development proposals, all approved by the Downtown Review Board at its May 6 meeting.

A 417-space parking lot is planned for the 4.6-acre site bordered by Vermijo Avenue to the north, Costilla Street to the south, and Sierra Madre and Sahwatch streets to the west and east, respectively.

Building new parking lots downtown goes against the philosophy of some urban planners who’d prefer to see the city invest in more walkable areas and public transportation. But the planned summer 2020 opening of the U.S. Olympic & Paralympic Museum and Hall of Fame, plus the spring 2021 completion of a downtown stadium, which will be home to the Colorado Springs Switchbacks soccer club, “create a significant need for off-street parking in this area,” the city’s staff report on the parking lot says.

Redevelopment in the south downtown area “will likely lead the property owner to pursue higher/better uses for the property in the near future,” the report adds — implying that the site won’t be used for surface parking in perpetuity. The parking lot was approved for an “interim use” of five years.

Meanwhile, a new bar called The Garden, approved to convert an existing structure just southwest of that planned lot, recieved a parking warrant. The warrant allows development without ensuring any of the 16 stalls required under city code.

The bar and beer garden — proposed for sites on South Nevada Avenue just south of East Costilla Street — would replace an existing parking lot. To make up for lost spaces, the establishment would lease parking from the Assistance League of Colorado Springs’ Bargain Box Thrift Shop next door. Customers could also utilize street parking or nearby garages. The Garden’s co-owner, Julie Nasser, hopes the bar complements other local businesses, to include serving libations made only by Colorado Springs companies.

According to the current plan, The Garden would be open weekdays from 11 a.m. to 11 p.m. The site’s currently approved for one food truck at a time, but the owners hope to eventually add a second. Russ Ware — who owns Wild Goose Meeting House and Good Neighbors Meeting House a few blocks north — is working with Nasser in a consulting capacity.

They aim to open the bar in late summer or early fall, if all goes as planned.

While some board members expressed initial concerns that the location wouldn’t have enough parking, they ultimately unanimously approved the project. “I can understand some of the parking concerns,” said board member Darsey Nicklasson, “but you know what? This is a dead corner — this is a dead neighborhood at night, and I welcome some liveliness to it.”