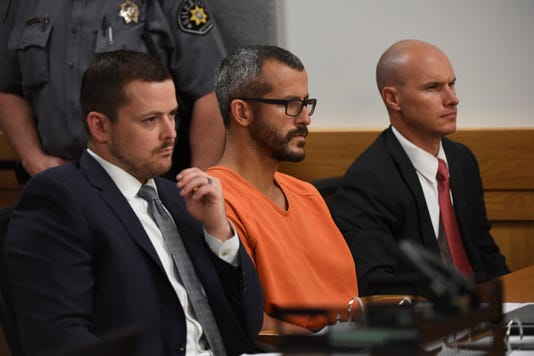 GREELEY, CO – AUGUST 21: Christopher Watts is in court for his arraignment hearing at the Weld County Courthouse on August 21, 2018 in Roggen, Colorado. Watts faces nine charges, including several counts of first-degree murder of his wife and his two young daughters. (Photo by RJ Sangosti/The Denver Post)

Two days later, husband and father Christopher Watts was arrested on suspicion of killing Bella, Celeste and Shanann, who was 15 weeks pregnant.

Their bodies were found Aug. 16.

Watts is scheduled to be sentenced Nov. 19 and will face life in prison without the possibility of parole. After sentencing, more details into the investigation, motive and evidence are expected to be released by the district attorney’s office.

Take a look into our complete coverage of the case thus far.

We will update this story with new information as it becomes available.

► Watch:Moments from vigil for Shanann Watts and her children

Nov. 9, 2018:Frederick community takes stuffed animals left for Shanann and girls and turns them into cuddle blankets for law enforcement to give to kids in crisis.

34-year-old Shanann Watts, her unborn child and her two daughters, 4-year-old Bella Watts and 3-year-old Celeste Watts, were honored at a candlelight vigil outside their family home in Frederick, Colo. on Friday, Aug. 17.

Court coverage of the case against Christopher Watts

► Court documents: Watts children found in oil well, may have been strangled

►Colorado man charged with first-degree murder in deaths of his wife, 2 daughters

Aug. 30, 2018: What’s next for the Colorado murder case against Christopher Watts?

Sept. 25, 2018: Judge orders DA to release autopsy records to Watts’ attorneys. DA’s office says they have not yet received reports from the coroner.

Nov. 6, 2018:Chris watts pleads guilty to nine felonies in connection with the deaths of his family.

► Video: Following his plea, Chris Watts’ mother Cindy opens up about her son’s relationship with Shanann, saying she “had a bad feeling” about her.

Nov. 19, 2018: Chris Watts is sentenced to three life terms for the murder of his wife and children.

March 7, 2019:Chris Watts confesses to killing daughters for first time: ‘I didn’t want to do this, but I did it’; new audio released by CBI

Understanding the case against Christopher Watts

► Chris Watts’ friends apologize for defending him, say they ‘had no idea’

► Video: Chris Watts friends: We had no idea he was capable of this