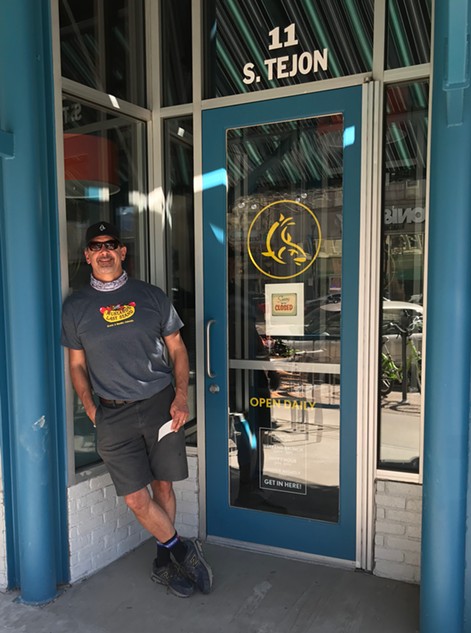 Jax Fish House & Oyster Bar opened with a bang in the Springs in early January, and had hit stride on Tejon Street before the mid-March order to cease on-site restaurant service due to COVID-19.

Chef/Founder Dave Query says that’s because “barbecue and chicken travel well,” compared to many of the higher-end items on other company menus. And from what we quickly learned after Jax opened here, quality and consistency means everything to the businesses.

They have also done some “socially distanced patio pop-ups” at various locations where customers can order online and do low-contact pickups on select days. The first pop-up at the Colorado Springs location takes place Saturday, May 2, but they’re already sold out for it. Query says there will be more days ahead. (Check their social media pages for updated info regarding the pre-order launch days and pickup days.)

Here’s a look at the limited menu:

I caught up with Query in person as he had just finished distributing free meal packages (veggie pasta with cheese and garlic bread) to industry folks and anyone else in need, on Wednesday, April 29 from Jax’s C. Springs patio. Roughly 50 meals went to folks who showed up, and roughly another 250 were donated to the Springs Rescue Mission Query tells me.

The company plans to do another round of donations from 1-3 p.m., Wednesday, May 13 at their C. Springs location as well. (“The meals will be handed out first-come-first-served by the honor system, so no need to show any proof of former employment, ID or anything else,” reads a company press release.)

Concluding our casual chat, Query made it clear to me that the same mindset of sustainability carries through now in the decision making on how best to take care of Big Red F’s enormous staff roster across locations, as well as customers. Ultimately, that’s also positioning all the eateries to open up strong when state mandate allows, hence some of the decisions to close certain locations while operating others and popping up in others.