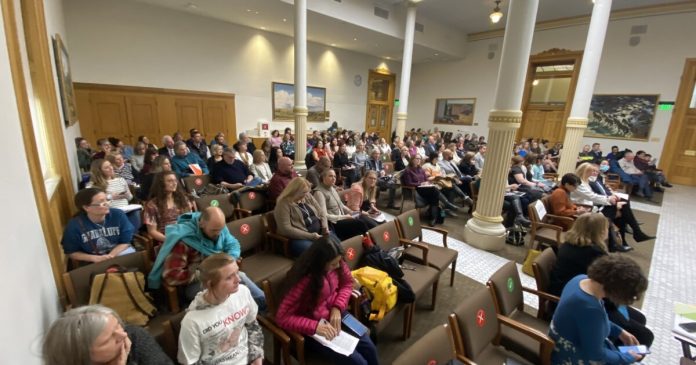 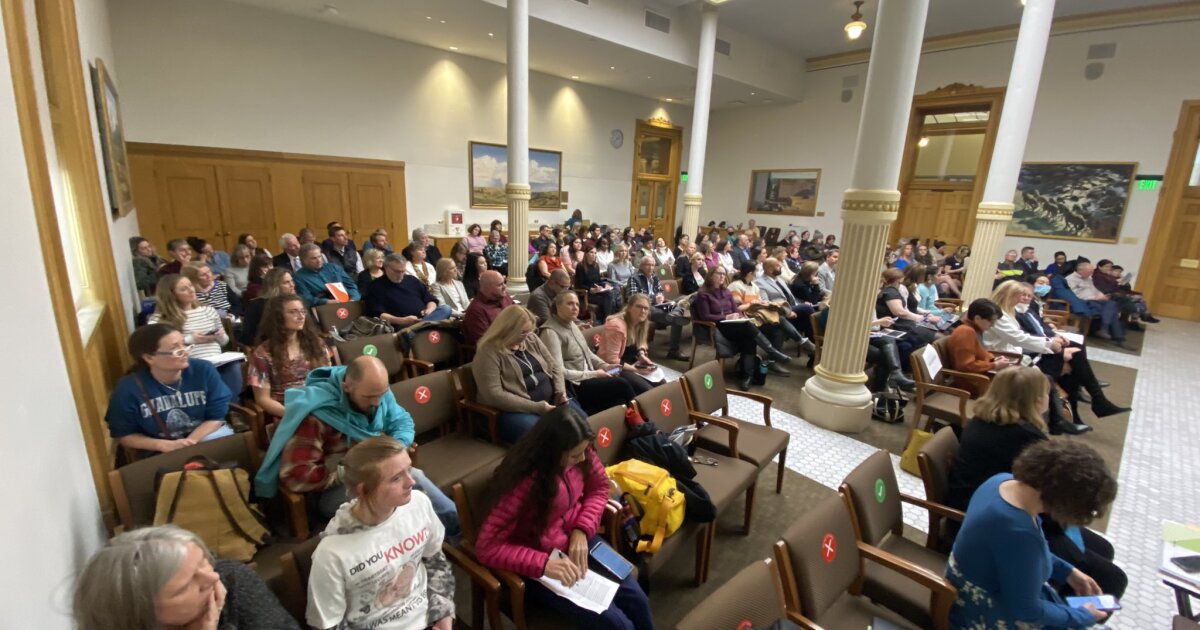 DENVER — A bill that would protect access to abortions in Colorado faced a lengthy first committee hearing Wednesday. More than 300 people signed up to testify over HB 22-1279, otherwise known as the Reproductive Health Equity Act.

A line wrapped around the second floor of the Colorado Capitol as people waited to get into the committee room to testify. Not everyone made it in, though, and many were sent to an overflow room to watch the hearing.

This is the most packed I’ve seen the Colorado Capitol in a while. More than 300 people have signed up to testify about the Reproductive Health Equity Act bill to codify a person’s right to get an abortion. This is going to be a very late night. @DenverChannel pic.twitter.com/93mdbYrh3d

Abortion access bills are not uncommon at the state legislature. Lawmakers have sat through hour after hour of testimony each time the topic comes up, featuring passionate pleas from both sides.

At one point early in Wednesday’s hearing, one woman was escorted from the hearing room after having an outburst where she yelled at state lawmakers for considering such a piece of legislation.

This effort is different. Instead of trying to impose restrictions or limitations on abortions, the bill aims to codify access to the procedure into state law.

“This bill is all about ensuring access and that’s it, period, the end,” said Rep. Meg Froelich, D-Arapahoe, one of the bill’s co-sponsors. “What we appreciate about this is that it sets the absolute framework and establishes that this is what we want in Colorado.”

The bill states that every individual has a fundamental right to use or refuse contraception and to continue or end a pregnancy. It also prohibits state and local entitles from denying, restricting, discriminating against, prosecuting or punishing an individual who has an abortion.

“We really feel Colorado is a place that respects women and pregnant people to make their own decisions,” Froelich said.

During the committee hearing, though, Republican lawmakers expressed concerns about how the bill would work and whether it was necessary in the first place.

Rep. Mark Baisley, R-Douglas, spoke about the conflict of rights between a mother’s individual liberty and a fetus’ right to life.

“I find the life of one to be superior to the liberty of the other,” Baisley said. “It’s not an easy thing to be asking of someone else to forego their right.”

He also raised concerns about when a life begins under the language of the bill. His interpretation of the bill is that a fetus is not given rights to life at any stage until their development and so life begins at their birth. Baisley and other Republicans on the committee expressed serious concerns with that prospect.

Meanwhile, Rep. Stephanie Luck, R-Fremont, asked about the timeliness and necessity of the bill, bringing up the failed attempts in the past to pass abortion restrictive legislation.

“If we believe that the people, that the citizenry are not going to change course, that they’re going to continue down this trajectory of not having any restriction on abortion, why is this bill necessary,” Luck asked.

She also questioned why bill co-sponsors decided to go with a statutory change, which can be rewritten or even rejected by future legislatures, rather than a constitutional change that needs to go through the voters if the co-sponsors truly want to codify abortion access into law.

If passed, Colorado would not be the first state to pass an affirmative access bill for abortions in the country. New York and California have already begun to lead the way on legislation like this.

The bill wouldn’t change much what people in the state already experience, according to Josh Wilson, a political science professor at the University of Denver.

“Very little will explicitly change with the passage of a law like this. It’s just affirming that a right exists,” Wilson said. “I guess what it does do is it tries to stave off local and state challenges in the future.”

He considers this bill to be a proactive response to a potential U.S. Supreme Court ruling expected later this summer.

Supreme Court Justices heard the oral arguments for Dobbs v. Jackson Women’s Health Organization in December and are expected to issue a ruling in June.

“There is, for the first time in a very, very long time, a real chance that the Supreme Court is going to reverse Roe vs. Wade or really dramatically open up doors for states to regulate abortion in ways that we haven’t seen before,” Wilson said. “This is really a preview of what a post Roe U.S. will look like. You’ll have states that protect and states that restrict, and we’ll get a very different landscape of the one that we have now.”

The bill also comes at an interesting time, roughly eight months before a midterm election, meaning it could influence voters on both sides of the aisle and will likely be used by both political parties as a talking point leading up to the election.

As of 11 p.m., testimony was still going on – nine hours after it had begun.

“We need this bill to protect that access because we do not know what’s going to happen in June… but it doesn’t look very good,” said a woman, noting the Supreme Court’s upcoming review of a challenge to Roe vs. Wade.

“What a brave bold statement the state of Colorado could make while states across the U.S. terrorize their own residents by criminalizing abortion,” another woman said. “Colorado has the opportunity to ensure that everyone has the right to choose when and if to have children.”

Testimony from those opposed to the bill largely implored committee members to view the matter through a religious or spiritual lens.

“It’s pretty clear that these are precious human beings that are violently killed in the name of choice,” one man said.

Others also in opposition said that Colorado had enough measures in place to protect access to abortion.