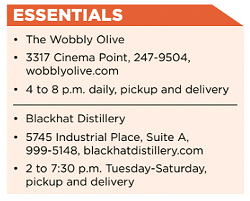 The east-west cultural divide in Colorado Springs seems deeper than the simple lack of a major east-west thoroughfare. But there are commonalities. While Westsiders and other locals have flocked in to support businesses across town, especially downtown, people in eastern Springs have been trying to bolster local businesses on their side of the city.

“We’ve seen a tremendous amount of local support,” says Sean Fitzgerald, co-owner of Wobbly Olive, Allusion Speakeasy and Happy Belly Tacos. “I think the east side hasn’t been as affected because [we have] a lot of military. There are a lot of up-and-coming white-collar [workers]. I think these people are still receiving checks through a lot of the shutdown.”

Setting aside the food menu, which is still available, Fitzgerald and his team have found ways to tweak their cocktail offerings to make them travel-friendly. As a result, they’re offering their full menu in to-go cups, with garnish on the side and a written encouragement for customers to share pictures of how they prep their drinks on social media. Fitzgerald says he’s waiting for branded plastic parfait cups to come in, which will have built-in containers for his garnishes.

He’s also working on another innovation: front door happy hour service, which he and his team will be rolling out soon. When we speak, he says he’s done the math and found out that, right now, it’s more profitable for the Wobbly to offer zero-fee delivery than to use DoorDash or other services, though he’s set a four-drink minimum. But the biggest challenge with that service hasn’t been the logistics, but the human element. It’s awkward to mix drinks while wearing a mask and gloves, and if the bartender feels awkward, he says that will make the customer feel awkward.

“People come to my bar, I introduce myself, bond with them, make a suggestion and make a drink,” he says. “Now I already have their drink, so I walk to the front door, make their drink and leave. There has to be more to that experience, so [we have been finding] a way to create relationships in five seconds instead of five minutes. And that’s been the struggle. [But] so far, it’s been a hit.”

Blackhat Distillery director Montana Horsfall has found ways of her own to adapt. Blackhat can’t offer cocktails to go, so they’re instead offering six-packs of non-alcoholic mixers formulated to be paired with their spirits. We pick up the mixer sixer that goes with their Royals and Rebels rum, sold separately, and we’re delighted. The mojito mixer, for example, makes three portions of beautifully balanced minty, citrusy beverage that highlights the strong molasses notes of the rum.

It’s worth noting that some mixers, such as the Classy Lady and the Tiki Time, do require the use of a cocktail shaker in their instructions, which come taped to the side of each bottle. However, with a little time, Horsfall can adjust what mixers are included in each six-pack to suit her customers’ needs.

Horsfall also takes orders for delivery across town, which she fulfills every Friday. And so far, these innovations have paid off.

“When everyone was downtown, doing their shopping in one area or in the Ivywild area, [business] out here was rougher,” she says. “With these to-go cocktails now… I wouldn’t say it’s too bad… [The only challenge is] getting [locals] to know that it’s here and available and on the Eastside, literally right out their front door.”