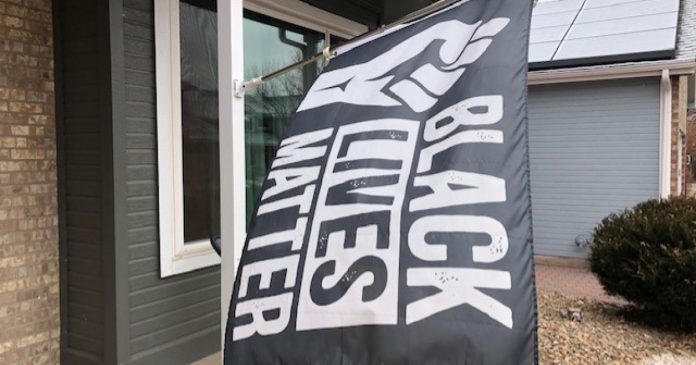 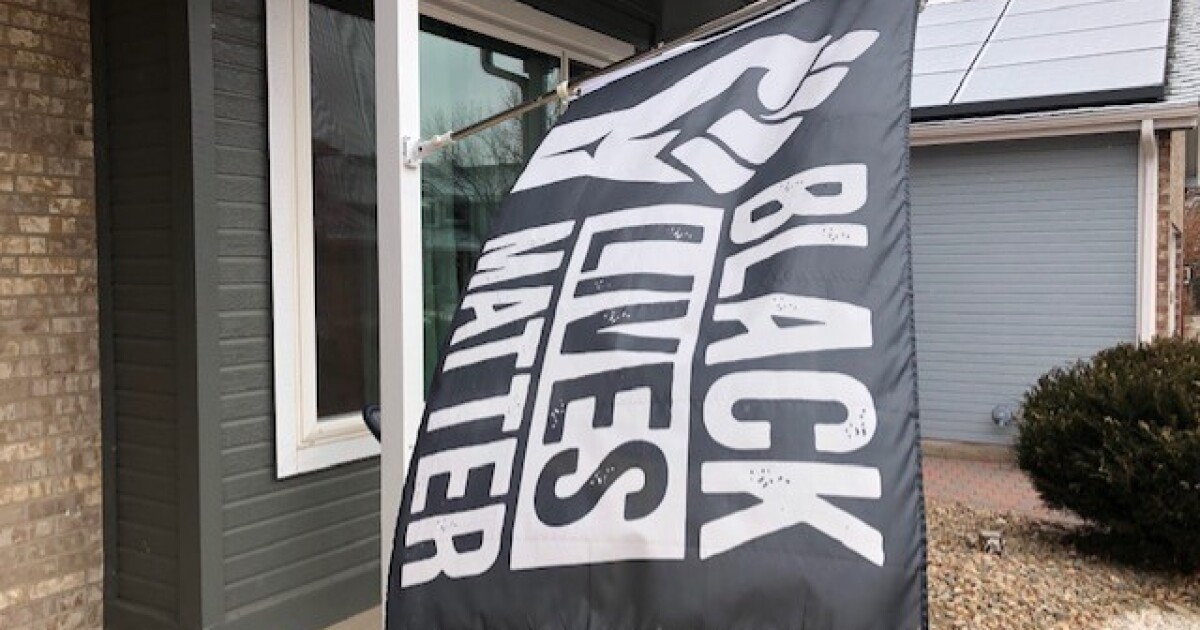 Several neighbors also have flags, most of them Stars and Stripes or an occasional college team flag.

The Wilkoffs said they posted a BLM flag outside their home for one simple reason.

“We have the flag because we believe Black Lives Matter,” Kara said. “It’s that simple.”

The couple said they believe in inclusion and love.

“We believe in change, and we believe in being the change that we want to see,” Kara said. “I want to take some action, and hanging a flag, to me, is a very small action that we can take.”

Kara said she posted her flag last August and noted it soon drew feedback from a passerby.

The Littleton resident said she was outside waving to her son, sending him off to school, when the passerby said something along the lines of “doesn’t my life matter too?” and “don’t you know that’s the sign of communism?”

In December, the couple received a courtesy notice asking them to take the flag down or go through the process of the architectural review committee with the board of directors.

“We did what they asked. We needed to get three signatures on our request for approval,” Kara said.

So, she took a clipboard, face mask, hand sanitizer and a pen and walked door to door, visiting 26 neighbors in 4.5 hours.

She said 17 answered their doors, 12 signed her request and 5 said no.

“I had great conversations with people I’ve never met in the 12 years I’ve lived here,” Kara said. “Folks who agreed with being able to display flags and folks who didn’t agree.”

She said she submitted her request Jan. 3, the same day she received a second notice of violation.

The HOA’s management company, PCMS, rescinded the second notice after she reminded them she had sent in a request for review that same day.

On Feb. 6, the Wilkoffs received a denial letter.

“I was sad, but I wasn’t surprised. What I was surprised about is that there was no reason given,” Kara said. “From what I had read in our bylaws, there was nothing about flags, nothing to exclude a flag.”

Kara said her goal “is not to victimize ourselves, or villainize an HOA. We proudly live here, and we want to stay here. To make change, you really have to figure out what the process is, what the rules say.”

Denver7 asked Jack Davis, a neighbor who flies the American flag, what he thinks of the Wilkoff’s BLM flag.

“I feel like what she’s done is perfectly okay,” he said. “I would prefer to see an All Lives Matter flag because all lives do.”

Davis said if there are limits, they should be “self-imposed.”

“People should understand how they’re going to affect their neighbors,” he said.

Kara believes they were called out because of fear.

She wants a conversation about Black Lives and HOAs, which she adds were born out of exclusion.

When asked if she’d be okay with a Confederate flag flying in her neighborhood, Kara said, “I don’t even know if I’m ready to go there.”

She differentiates between symbols of inclusion, which she said the BLM flag represents, and those of exclusion.

Kara said she had a conversation recently with her friend Suzy, whose husband, Amon Gibson, wrote an article for Runners World detailing what it’s like to go out for a run as a Black man.

“Every time he runs, he takes a calculated risk. He has to watch where he goes and who he follows,” Kara said

“Your flag represents a place where he can go when he starts to get followed,” Suzy said. “It’s a place of safety and refuge where someone will open their door and receive him, [if he’s in danger] for running while Black.”

“I hadn’t thought of that,” Kara said. “It hadn’t occurred to me that this can mean something to so many different people and that we live in a place where running while Black might be a crime. So, we will keep this flag up for Amon Gibson, for Susan Flood and for our family, and for everyone out there who has not had representation or support.”

Kara said the HOA rescinded the initial denial, asking for more time to weigh the issue and then issued another denial.

Friday afternoon, PCMS Community Manager James Fletcher released a statement saying the HOA is putting the brakes on enforcement for the time being:

“Our property Management company is working with the homeowners to find solutions that meet the legal and social demands of this problem. We make every effort to apply our homeowners covenants consistently and impartially. Those covenants allow for signs only for sale and during elections. Now that the elections are over, we are working with the volunteer board and other homeowners to find a mutually agreeable outcome. We have notified all homeowners with signs on display of the sign restrictions, whether the message is sports or issue related. While we work toward agreement and possible updates to our covenants, we have suspended enforcement on the Wilkoff’s sign. We are confident that we can best resolve this or any disagreements by encouraging neighbors to dialogue directly with other neighbors.”

Ben Wilkoff said they’ll always be advocates for dialogue and understanding and are anxious to see how serious the HOA board is about an agreeable outcome.