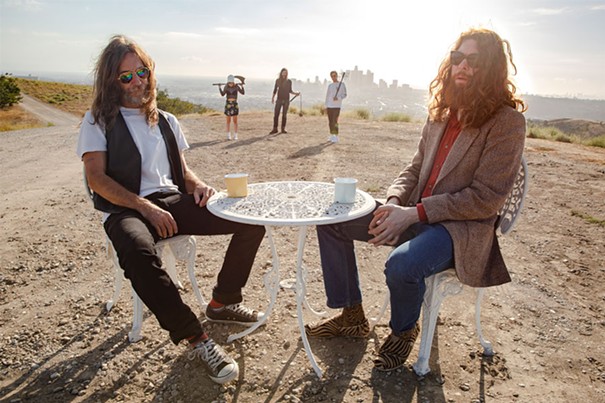 During hard rock and heavy metal’s formative years, keyboardists played an indispensable role in some of the genres’ most influential bands. Seminal Deep Purple albums like Machine Head and Made in Japan wouldn’t be remotely recognizable without Jon Lord’s driving Hammond grooves and Bach-influenced keyboard improvisations. Uriah Heep’s Ken Hensley, whose heavily layered synthesizers dominated the band’s bombastic arrangements, also wrote and arranged most of their hits.

So how is it that keyboardists fell out of favor and are still largely absent from today’s hard rock lineups?

“I tend to wonder the same thing,” says Black Mountain keyboardist, arranger and songwriter Jeremy Schmidt. “As is probably evident from my contributions to the band, I see heavy rock with keyboards, organs and synthesizers as a force for good in the world. And then it just became less fashionable somehow. When I would hear those records with Rick Wakeman and Jon Lord playing tons of keyboards, I’d be like ‘Why don’t people do this shit anymore?’ So it was like, OK, I’ll do it.”

True to his word, Schmidt puts his vintage Mellotron and other analog electronics through their paces on Destroyer, Black Mountain’s latest collection of what NPR has described as “old-school, face-frying, fist-pumping, riff-heavy rock at its finest.” The Vancouver band’s fifth full-length release, Destroyer’s highlights include the Priest-on-acid ecstasy of “Licensed to Drive,” the paisley revivalism of “Pretty Little Lazies,” and the unabashedly Yes-inspired “Closer to the Edge.”

Co-founded by Schmidt and singer-guitarist Stephen McBean back in 2004, Black Mountain started out modestly enough, rehearsing in the basement of the memorably named Pigeon Park Savings Bank. Their first release was a split-single with Destroyer, the band led by New Pornographers member Dan Bejar.

When asked if Destroyer will name its next album Black Mountain, Schmidt insists there was no quid pro quo.

“I don’t think that would be an oblique enough move for Dan Bejar,” he says with a laugh. “But yeah, they’re great friends of ours, and part of our naming the album that was just to amuse ourselves. But it was mostly because, when Steve and I were trying to come up with a title, we wanted it to be some kind of action word, you know, like [ZZ Top’s] Eliminator. And then when Steve came up with Destroyer, we were like ‘Oh God, we’ve got to use that.’”

The album also boasts a guest appearance by Sleepy Sun vocalist Rachel Fannan, as well as a trio of drummers that includes Kliph Scurlock from the Flaming Lips, who are still one of Schmidt’s favorite synth-pop bands.

“I think analog synths have had a resurgence in popularity over the last 20 years,” says the cautiously optimistic keyboardist. “And, while I don’t know if this is totally true, it does seem like people are becoming less segregated when it comes to genres of music and what they enjoy sonically. I guess that’s just a condition of the postmodern world.”