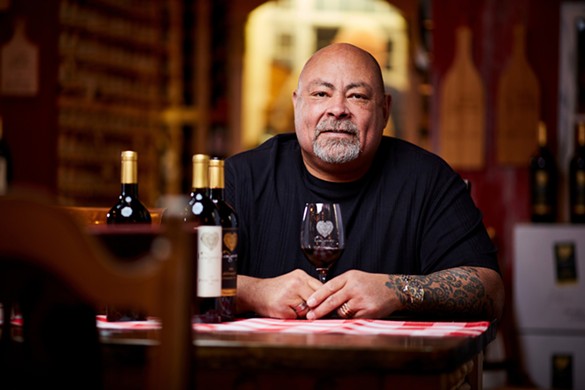 The timing of the PR push obviously couldn’t be more relevant given the current Black Lives Matter movement activities globally. In that same Wine Enthusiast Q&A, Long addresses BLM, saying, “I don’t know exactly the dynamic, but there obviously is a movement and a push to support Black-owned businesses. I’ve never seen this many new followers in months, let alone hours.”

The AAAV only hosts two dozen member wineries, and Kelly tells me that Long puts the number of black-owned wineries at less than 1 percent of U.S. wineries. Long’s also quoted as saying he didn’t set out to get into the industry specifically as an African American winemaker; “I just got in the industry because I liked making wine.”

Earlier in June, Springs Native published a crowdsourced list of Black Owned Businesses to Support in COS, and many locals have made the effort to participate. Since we don’t host any local Black-owned wineries, Longevity’s arrival to local liquor store shelves fills a void for one commodity that still keeps dollars flowing toward a select demographic consciously. (Longevity, like all businesses, has taken quite a financial hit due to COVID-19 restrictions, so the support’s more than welcome.)

Kelly sent us a sample bottle each of Longevity’s Chardonnay (2019) and Cabernet Sauvignon (2018), which are also among the first to be sold nationally with the uniquely resealable, twist-off Helix cork, she notes. Long designed the wines’ heart-shaped logo for his wife and winery co-founder, Debra, who passed away from pancreatic cancer in 2019.

From provided tasting notes, the Chardonnay should lead with aromas of melon, pear, pineapple, white blossom, mint, yeast and toasted oak. Sips should further evoke honeydew and lemon. The Chardonnay’s cut by a scant 1-percent each Sauvignon Blanc and Pinot Grigio plus an unlisted 2-percent of “mixed” grapes. The multi-vinyard-blend Cabernet’s cut with 10-percent each Rubired and “mixed” grapes. See if you can detect black cherry, cassis and pomegranate amidst oak and a vanilla-cocoa in that wine.

I’ll do no better in describing them since I’m not a sommelier — and I generally stand by the “drink what you like” cliché” anyway — but it’s easy to say both wines are impressive for their respective dominant varietals and categories. I don’t personally get all the descriptors, but the citrus definitely shines in the oaky Chard and the cherry’s easy to pick out in the Cab, equally oaky, very smooth and only faintly tannic in the finish.

Coincidentally we ended up pairing the wines with Cajun food from a local Black-owned business (see review at csindy.com soon), so we tested them against spicy, smoke-laced food which I’m sure isn’t the most ideal pairing out there. But I will say the Chard’s butteriness and mild sweetness helped counterbalance some of the heat and the acidity cut right through the richness of thick, dark gumbo. Despite the low tannins, the Cab held its own against a near-blood-sausage-dark beef link and played off the paprika in an interesting way.

And for whatever it’s worth, we found ourselves still thinking about the meal as a whole the next day — excited to revisit leftovers and the second halves of each wine bottle. My dining companion, a regular wine drinker who generally cares not for Chardonnay, said this one has converted her, and she’ll seek it out in the future.

So, cheers to (all of our) Longevity.