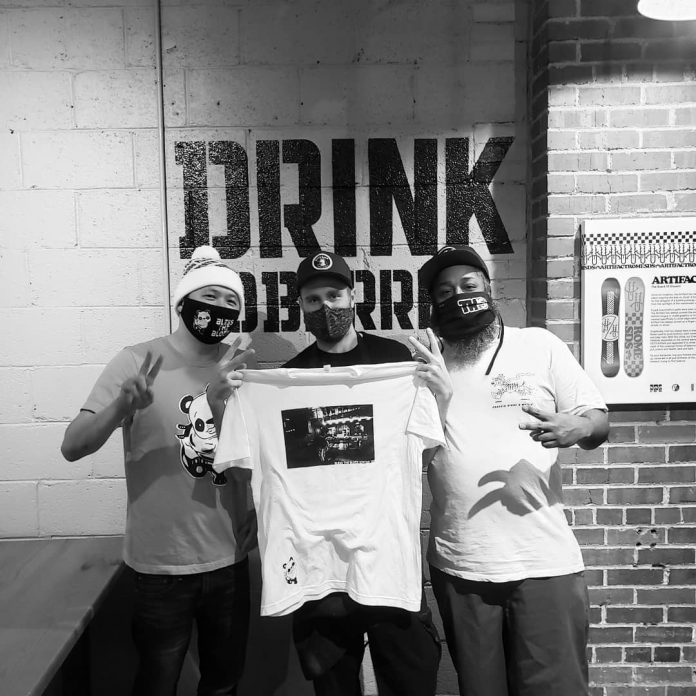 There are few things more endearing than an arts fundraiser — Denver locals, tatted and eclectic, coming together in the name of creativity to feed and finance their community. This was the premise of last week’s Bless the Block fundraiser. Bless the Block, the brainchild of bartenders Chad Pyper of Lustre Pearl Denver and Stacey Parson of Gerard’s Pool Hall, was organized as a benefit to support their employees and the general Five Points/RiNo area in a year that has been incredibly difficult for working folks in this part of the city. The result, a bi-weekly, community-driven showcase provides relief to artists and workers in the neighborhood. The duo tapped Denver musician Wes Watkins and a rotating cast of artists to provide tunes, found sponsorship from Red Bull and Wild Panda, amongst others and uses Gerard’s as a hosting venue.

The fundraising occurred via Wild Panda’s $5 raffle, whose proceeds support $500 relief grants for hard-working locals, nominated by their peers in the community. Wild Panda also sold custom Bless the Block merchandise where a portion of sales went toward the ongoing fund. 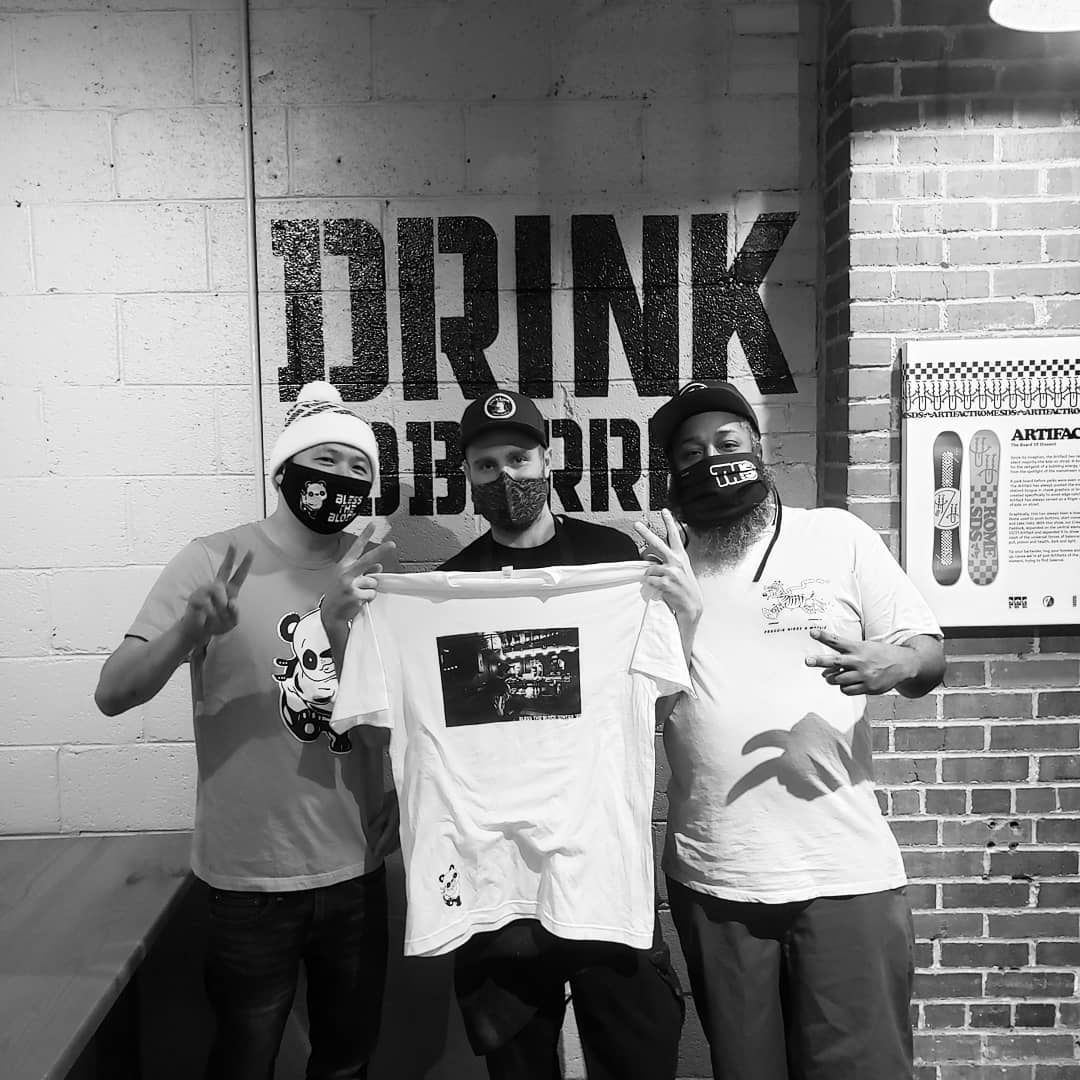 Homespun as the concept of Bless the Block is, the event was no schoolyard bake sale. The first showcase, over two weeks ago, drew more than 200 socially-distanced gatherers, a number made even more impressive given the event’s Monday night timeslot. The overwhelming support speaks to a communal desire to raise money for blue-collar artists and service workers in an area increasingly alienated from its blue-collar roots, due to development and artistic vibrance, made worse by pandemic regulations.

We caught up with Pyper before the show to discuss the importance of events like Bless the Block for the current moment and for the neighborhood itself. He was gracious, stressing that, while he, Parsons and Watkins were the vehicles, the people showing up and supporting were the force that was making it happen.

“The event itself came about to help for the winter season. I think there is a lot of fear and anxiety about people and businesses making it through.” Although this is disheartening, Pyper beamed with some neighborhood pride describing how easy it was to find sponsors for the initiative. “There was no going door to door with letters…it’s nothing like a typical non-profit with a lot of agendas and hands in the pot. We’re a really good neighborhood down here and we do stick together.” 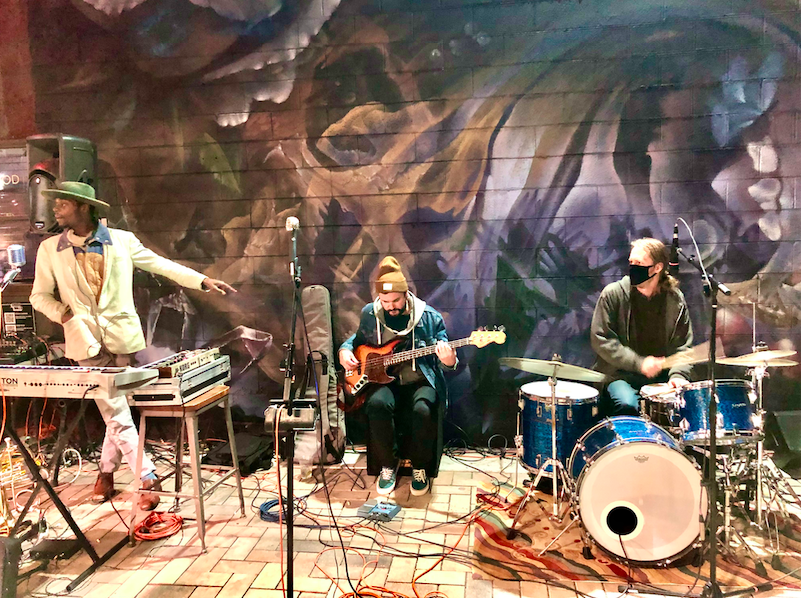 For a free concert, the set was surprisingly tight. Watkins and company played a collection of original jams that spanned from fall-off-the-bone funk to lithe neo-soul that would feel at home on either of Robert Glasper’s Black Radio projects. Cruz served powerful vocals alongside a hearty dose of cheekiness, keeping the crowd dancing and laughing with a standout track that discussed, ehem, getting it on in the back of a Subaru. It was pure Colorado and entirely too much fun.

We also had the chance to talk with uninhibited frontman Watkins during a break. We connected quickly, bonding over the shared hurt that many Black and Brown Denverites harbor about the transformation of one of our few, small corners of the city. It was something that the multi-instrumentalist pushed to talk about and he didn’t mince words on the topic.

“If you put a microphone in my face, I’m telling you about this neighborhood. There are still pockets of good people who want to get the vibe of the ‘hood across.” I interpreted this as a hat-tip to Pyper, Parsons and the rest of the Bless the Block organizers. “I can’t sit down and let a gentrifier take what I’ve fought for my whole life.”

Of course, the night wasn’t all salt and righteous anger. The atmosphere was ultimately unifying and the music spilling into the streets attracted listeners of all backgrounds, most of whom stayed to sip sponsored Red Bull cocktails, two-step with abandon and clamor for multiple encores at the end of the set. Scott Peterson, a line cook at 10 Barrel Brewery and father of two, won the week’s $500 grant to assist with medical bills.

As potentially one of the last live events before a rollout of more stringent restrictions, Bless the Block was a deeply needed and symbolic space. At the very end of the set, Watkins issued a challenge to the band – “let’s see what we can do with this one” – and queued a difficult, robotic synth loop to riff off of (imagine playing jazz over a less-palatable Kraftwerk instrumental).  The group pulled it off flawlessly, however. This final encore, more than anything, encapsulated the spirit of the Bless the Block. Improvised, but not rag-tag. Spirited and fun, but with a raw political edge that spoke to the undying soul of a neighborhood and the community that calls it home.“Five Points is music,” Watkins asserted poignantly.

Events like Bless the Block, and the folks who host them, are keeping this music alive through grit, innovation and something that can only be called love. It is up to us to join in this fight with them – now more than ever.

Due to new regulations, Bless the Block showcases planned for December were canceled. The next events will likely be going virtual. You can support current and future goings-on staying up to date and contributing to local relief funds.