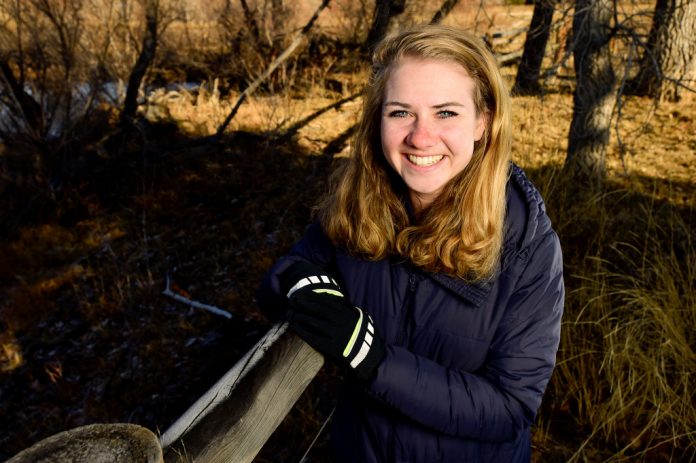 Imagine swimming, running and biking all day, every day, for almost a month. Now imagine adapting so quickly to it that each day of activity feels better than before.

That’s what happened for Boulder resident and ultratriathlete Laura Knoblach, 24. In the early morning hours of Oct. 31, after racing for 633 hours, 41 minutes and 39 seconds during the course of 26 days, Knoblach finished in first place in the women’s division of the Todo Triathlon, a double deca ultra-triathlon. Her finish broke the previous world record for the double deca by about 10 hours, setting a new women’s world record for the race. She also broke the men’s United States record.

A double deca ultratriathlon is the equivalent of twenty Ironman races. By the time the race is done, an athlete will have swum 47 miles, biked 2,200 miles and ran 524 miles.

If the sport sounds brutal, it’s because it is, at least physically. Knoblach said that while the transitions between the sports were difficult, especially the first few days of running after the biking portion, she got into a flow where each day she felt better.

“I had heard of this happening from others,” Knoblach said. “Then it happened, and I was like, oh my goodness, the human body is really cool.”

Sometimes, the race is structured like an Ironman, with each day having a mix of the three sport components. For the Todo Triathlon, hosted in Léon, Mexico, competitors finished each component sport before moving on next — first swimming, then biking and finally running — in what’s called a continuous format. It was the third race ever held in this format, according to Jacs Spence, a publicist for Knoblach and Shanda Hill, another athlete who participated in the race.

Knoblach also was attempting a double deca for the first time; she became the second woman in history to finish a race of this caliber and format. Only one person has finished two double deca races.

While some ultra-triathlons have one long, continuous route, the Todo Triathlon operates on a looped course. Knoblach said while that can get monotonous, it’s easier for support crews to keep tabs on athletes and help them almost as soon as they need it. It also allows the athletes to get to know each other throughout the race.

“It felt like a team effort, even though we knew we were competing against each other,” Knoblach said.

That team effort began months before the race, when Knoblach, Hill and two other women who competed started talking in a group chat, planning supplies and “hyping each other up.”

During the running portion of the race, Knoblach was neck and neck with Hill, 37. About halfway through, the pair talked about when to stop pacing themselves to make sure they both finished and move on to pushing each other in competition for first place. They agreed to wait a few more days.

Then Hill got food poisoning. She still finished in second place about 13 hours behind Knoblach’s time. Hill said they both received lots of support throughout, from each other as well as their crews and other athletes who flew in to visit. In the end, this helped them both race to the best of their ability, which is what was most important to Hill. Both women agreed that they would have to compete together in the future.

“We can be so close off the race track, and then all bets are off when we’re racing,” Hill said. “I love it. I’m so proud of Laura as a racer. I can’t wait to push her again.”

As much community as competition

At 24, Knoblach is younger than most of her competitors. She says that while both her age and her gender surprise people unfamiliar with the sport, she’s been accepted and respected by its community, taking on the role of “little sister,” as she called it.

That support became necessary when, last year, Knoblach publicly accused her father — former Minnesota state Rep. Jim Knoblach — of molesting her for most of her childhood. While she says she ended up losing contact with most of her family as a result, the ultra-triathlon community stepped in to fill the gap, including inviting her to holiday celebrations. She and Hill are planning to spend Christmas together soon for the second year in a row.

“If I hadn’t had this community to fall back on, it would have been much more difficult to come out and I would have felt much more alone,” Knoblach said. “Ultra-tri made me realize I’m stronger and more capable than I thought.”

For now, she’s in full rest and recovery mode, catching up on sleep and taking time to create art, which she says helps give a creative balance to her life.

During the Todo race, she met “the best massage therapist ever,” a young Mexican man who told her about his plans to go to school in January despite the high cost. He accepted her offer to help pay for his tuition, so she’s working on an art piece to sell to raise funds.

While Knoblach is considering competing in a 2020 1×30 race — 30 Ironmans in 30 days — she won’t commit to any competition for a month or two to give herself time off training. She won’t stay away from the sport for long, though.

“There’s something about seeing people overcome obstacles and push themselves for success,” Knoblach said. “I come home from these races motivated and it’s easier to not see obstacles in my life as impossible.”