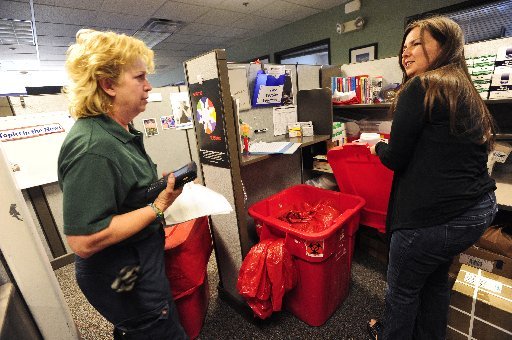 Editor’s note: A previous version of this article misstated Dr. Michelle Barron’s title. It has been updated.

Boulder County has managed to sidestep the worst of a state and nationwide outbreak of Hepatitis A in recent years.

According to data from the Colorado Department of Public Health and Environment, of the 315 cases of the disease reported in Colorado, only eight have been in Boulder County. And of the two deaths in the state from Hepatitis A, neither happened here — one was in Denver and the other in Arapahoe County.

Nearly 230 have been hospitalized as a result of the disease statewide.

Lisa Widdekind, Boulder County Public Health’s emergency manager, said early intervention on the part of public health officials in the county had a lot to do with the lower local numbers.

“What I think is especially unique in our situation is that as soon as we were aware that there was an outbreak going on in the country, we decided to begin to help by vaccinating,” she said.

Elsewhere in the country, the number of cases has far exceeded what Colorado has experienced as well. In Kentucky, nearly 5,000 have been reported with over 2,400 hospitalized and 61 deaths. In Florida, there have been more than 3,600 — nearly 2,600 of those resulted in a hospital stay with 56 deaths.

Nationwide, more than 29,300 cases of the disease have been reported since the outbreak began more than three years ago.

The populations normally hit the hardest, according to Widdekind, include drug users and those with unstable housing who don’t have regular access to a bathroom. People who suffer from cirrhosis of the liver are also more susceptible, she added.

“What we did was … work with organizations in the community, with populations who are most susceptible,” she said.

Boulder County Public Health, she said, has worked to administer vaccines in a number of different places to a variety of groups, from a health fair in Nederland to the Boulder County Jail — where inmates are more susceptible than most, according to Widdekind.

Dr. Michelle Barron, UCHealth University of Colorado Hospital’s medical director of infection prevention, said, however, that it’s not just vulnerable populations that should consider getting vaccinated.

“For this particular outbreak, I think it’s a good idea for people to be vaccinated anyway, especially if you like to eat out,” she said, adding that Hepatitis A can be transmitted through food.

“Hepatitis A is still one of the most common foodborne illnesses that we see in the United States,” she said. “I think people sort of think of Hepatitis A as very exotic in its nature and that people only get it if you travel abroad.”

Barron said this misconception can lead people to underestimate the disease, and the need for getting vaccinated.

As far as symptoms, Barron said Hepatitis A doesn’t come on strong, initially presenting as fatigue, leaving people tired with low-grade fevers before causing more serious symptoms. Initial symptoms could take two to six weeks to present themselves, according to the Colorado Department of Public Health and Environment.

“As it progresses, people start having more gastrointestinal symptoms, so nausea, vomiting, maybe some abdominal pain associated with that,” she said. “They might notice that their urine suddenly turns really dark, and that’s usually around the time when they’ll notice that their skin and their eyes are turning yellow.”

This yellowing of the skin and eyes is due to liver failure, and Barron said this is usually the reason folks finally choose to seek care. She added a certain subset of people won’t be able to recover from the resulting liver damage, which is how the illness can become deadly.

While the liver recovers, giving supportive care to mitigate damage other organs might experience is the main course of action, she added.

“Unfortunately, there is no treatment that we can give that actually stops the virus from doing what it’s already done,” she said of the treatment options available to those who have been diagnosed.