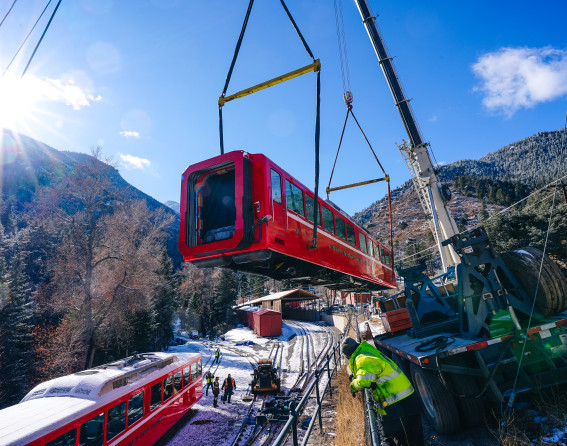 After more than three years of renovation, the Broadmoor Manitou and Pikes Peak Cog Railway is ready to leave the station again!

“The Cog,” as locals call it, is recognized as the world’s highest and longest cog railroad, and it has carried passengers to the summit of Pikes Peak since 1891. To welcome back one of Colorado’s most unique experiences, here’s a little history on the railway, a rundown of the recent renovations and what to expect during your next visit.

Pikes Peak was home to the Tabeguache Ute long before European explorers arrived. They called the mountain Tava, meaning “Sun.” In 1806, explorer Zebulon Pike wrote about the mountain in his journals, and although a blizzard kept him from reaching the 14,115-foot summit, his descriptions of “The Great Peak” ultimately led to it being named in his honor.

The mountain also inspired the song “America the Beautiful,” which was written in 1893 by English professor and poet Katharine Lee Bates after she visited Pikes Peak during a trip across the country.

In the late 1880s, Zalman Simmons, inventor and owner of the Simmons Beautyrest Mattress Company, rode a mule to the top of Pikes Peak. He was in awe of the breathtaking views but worn out from the two-day trip. According to local legend, he was soaking in one of the mineral baths in Manitou Springs when the owner of his hotel mentioned the idea of building a railway to the top. Simmons quickly set about doing just that, founding the Manitou and Pikes Peak Railway Company in 1889. Construction began right away, and on June 30, 1891, a church choir from Denver became the first passengers to reach the summit of Pikes Peak by train.

In 1926, Spencer Penrose, the owner of The Broadmoor resort in Colorado Springs, purchased the railway from Simmons. Over the years, gasoline, diesel and diesel-electric locomotives replaced the original steam engines. As tourism grew in the 1960s and 1970s (the summit of Pikes Peak was declared a National Historic Landmark in 1961), the railway began to modernize, adding larger and more efficient railcars from Swiss Locomotive Works in Winterthur, Switzerland.

A new track replaces the old one

The Railway reopens in May 2021

After 126 years of operation, the Manitou and Pikes Peak Cog Railway temporarily closed in 2018, beginning three years of upgrades and improvements. The old track was demolished and all nine miles were replaced.

The four existing diesel engines were refurbished with new floors, seats, a sound system and vinyl wrap, and their axles were converted to a new cog system. In addition, three new trains were produced in Switzerland. The new trains can each carry up to 261 passengers per trip, and the four refurbished railcars can carry 214 passengers. The Cog also purchased a new snowblower from Switzerland that can cut through snowdrifts up to 14 feet tall to clear a path for the trains to the summit.

Ready to hop aboard? You’ll begin your journey from the new depot in Manitou Springs. From there, you’ll gain nearly 7,800 feet in elevation, admiring the changing scenery and wildlife as you climb through rocky canyons and forests of aspen, Colorado blue spruce and bristlecone pine (some of the oldest living organisms on the planet!). The train cruises past stacked boulder formations and a waterfall, then through Deer Park and up to the summit. Guests routinely spot chipmunks, squirrels, prairie dogs, rabbits, raccoons, elk, deer, yellow-bellied marmots, bighorn sheep and even the occasional bear along the way. All the while, the train conductors share historical facts (and a few tall tales) about the mountain.

Once at the top, you can explore the brand new Pikes Peak Summit Visitor’s Center, now the most sustainable high-altitude structure in the country. In addition to the breathtaking 360-degree views, you can enjoy interpretive exhibits and interactive digital displays that bring the history and geology of the mountain to life.

And don’t worry — the Peak’s famous donuts are still available at the summit, along with new menu items. If you want a snack for the train, arrive at the depot early to purchase delicious fresh roasted nuts, frozen fruit bars, ice cream, trail mixes and beverages for the trip.

The Broadmoor Manitou and Pikes Peak Cog Railway will reopen in May 2021. Purchase your tickets in advance online.