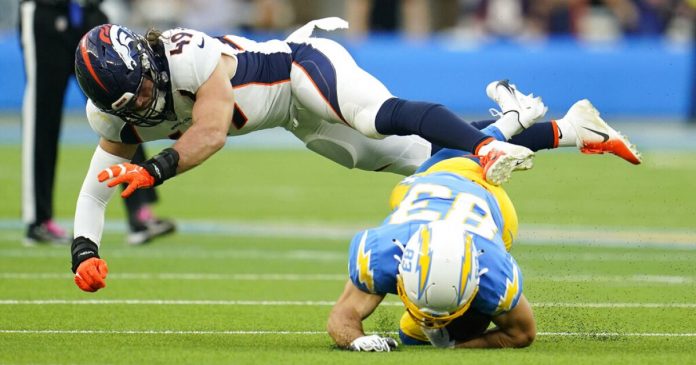 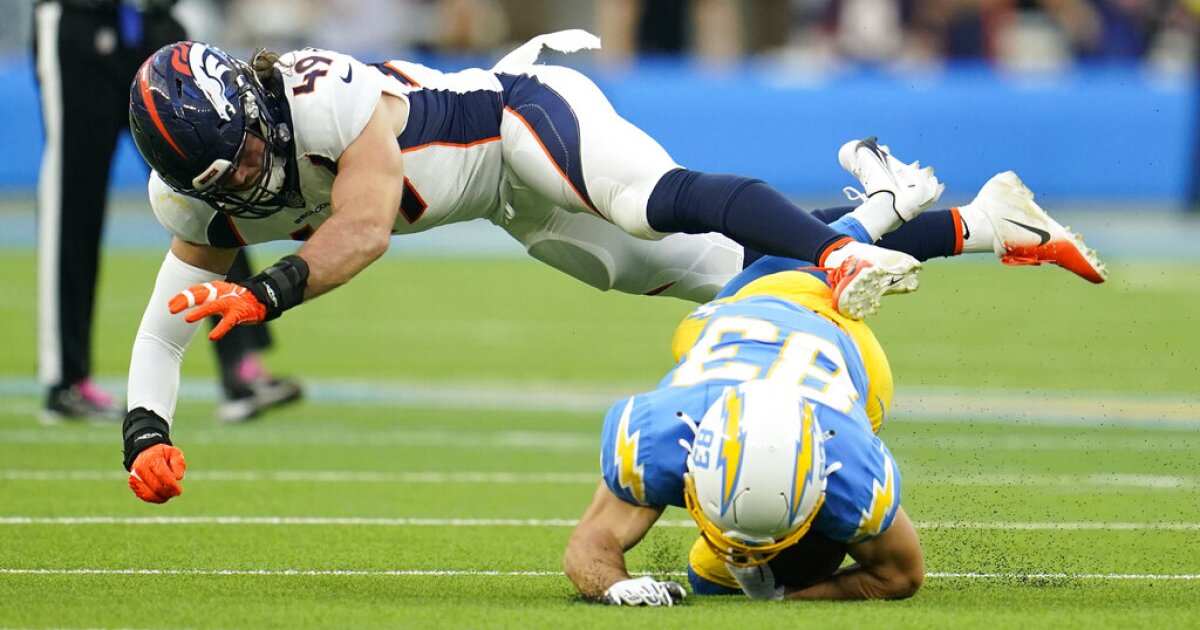 ENGLEWOOD — Alex Singleton stood in the grass in Thousand Oaks, Calif., where he could feel the California breeze and the sun overhead. He stood there waiting to hit someone.

It defines Singleton in his first season as the Broncos’ new starting inside linebacker. Those who wrap up and bring opponents to the ground have become raiders of a lost art.

Singleton delivered an eye-opening performance on Monday against the Los Angeles Chargers, posting 21 tackles, among them 19 solo stops, the most by a Bronco since at least 1994.

Singleton learned his craft when he was around 8 years old. The story is as fabulous as his performance in Los Angeles.

“I’ve got to thank my dad and coach way back in the day. My dad would bring a door from work out to practice, so you couldn’t see the guy. It would be my little brother (Matt) and my friends. They would have one on one side and one on the other, and we didn’t know which side they were coming out of,” Singleton said.

“The cones were a yard apart on each side, and when they popped out from behind the door you had to tackle them before they got into the end zone. I would try to pair with my brother so I could hit him.”

Singleton smiled at the recollection. Yes, he was just a kid, but it is impossible not to connect the dots to his career. He boasts seven 100-tackle seasons: two at Montana State, three for the Canadian Football League’s Calgary Stampeders and a pair with the Philadelphia Eagles, including 137 last season.

“This is like my 22nd or 23rd year of playing football. We still hit a lot when I was growing up,” Singleton said. “All the drills they don’t allow you to do anymore, we did.”

Singleton, 28, has started three times in place of Josey Jewell (sidelined by calf and knee injuries), registering 35 tackles in those games.

Chargers quarterback Justin Herbert attempted 57 passes Monday — “With our corners and DBs, they weren’t throwing deep, there were a lot of check downs and underneath routes,” Singleton explained — and it created a stream of opportunities for the veteran. Singleton, however, is multi-dimensional. He owns four tackles for a loss and a quarterback hit.

“He’s just a ball magnet. It’s no surprise. He has a nose for the ball,” Broncos defensive coordinator Ejiro Evero said. “He can really tackle and get people down to the ground.”

Singleton was signed as a free agent this offseason to push inside linebacker Jonas Griffith for a starting job, while also providing special teams acumen. He plays with intensity and energy that meshes nicely with this fangs-dropped defense. The Broncos rank fourth in points allowed (16.5) and sacks (19) and third in yards (290.3) per game.

“For years, you watch from the outside, no matter what was going on the other side of the ball, they were always one of those top-five defenses,” Singleton said. “And you were like, ‘Dang. They have whoever at quarterback and they are still playing like that and in all these games year-in and year-out.’ To come here, since OTAs you could feel the confidence everybody has in this room. It’s cool. It continues to build and to be part of it is special.”

To excel like Singleton did at SoFi Stadium resonated on multiple levels. Not only were his family and friends in the crowd, but the entire coaching staff and team from Thousand Oaks High School, where he once starred and helped coach this offseason, attended.

For Singleton, it was a bit of a full circle moment, one made possible when a door opened him to a career in football.

“You either learned to tackle or learned to run if you missed. And I wasn’t very fast for awhile,” Singleton said. “I have been saying it for years. I appreciate them teaching us with that door.”