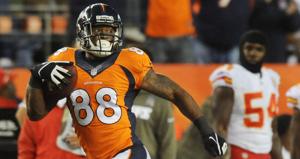 DENVER — The Broncos will honor former wide receiver great Demaryius Thomas several ways Sunday in their game against the Lions.

Thomas, who died Thursday at the age of 33, played 11 seasons in the NFL, nine of which were in Denver. He’s considered one of the best players in franchise history, finishing second all-time in yards (9,055) and touchdowns (60) and third in receptions (665).

The team will celebrate Thomas’ career and life with a moment of silence pregame, a tribute video, a painted “88” on the Broncos’ sideline and by wearing No. 88 helmet decals. There will also be an opportunity for fans to pay their respects at a memorial for Thomas at the base of the horse sculptures in Ring of Fame Plaza starting at 10 a.m.

The Broncos and Lions are set to kickoff at 2:05 p.m. at Empower Field.