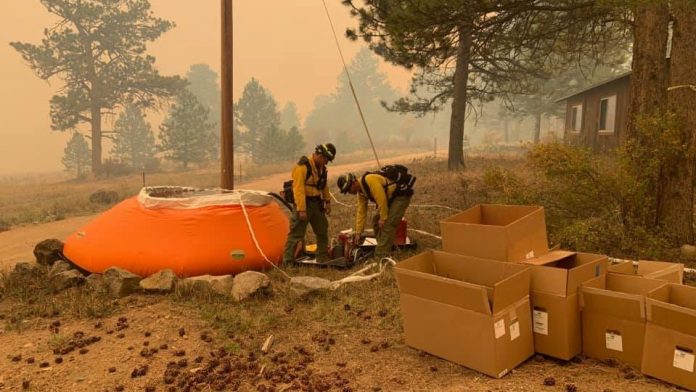 The Cameron Peak Fire’s 22,000-acre run over the weekend resulted in 39 buildings destroyed and two structures severely damaged, according to the Larimer County Damage Assessment Team. Eight of the structures destroyed were homes.

That brings the fire’s structure damage to 95, including 33 homes. The 2012 High Park in the lower section of the Poudre Canyon destroyed 259 homes.

The fire is at 125,006 acres with 21% containment as of a Tuesday morning update from the Northwest Incident Management Team, which took over command of the fire Tuesday. The fire is the largest active wildfire in the state and third-largest in Colorado history. There are 852 personnel on the fire team.

Over the Labor Day weekend, extreme fire conditions similar to those that confronted firefighters this past weekend burned 54 buildings, including 25 homes. Twenty-three of those homes burned were in the Monument Gulch area east of the Pingree Park Road. That fire run consumed two historic properties and damaged a third south of Rustic.

“We hate to see structures lost and we feel for those families,” said Dave Gesser, outgoing fire incident commander, during a Monday night video recap. “We strive to save all those communities.”

Crews were able to keep the fire from reaching Red Feather Lakes, but the Shambhala Mountain Center south of the community received damage to several buildings. However, the center’s prized Stupa, a Buddhist shrine in which meditation is practiced, was unharmed.

Cory Carlson, outgoing fire operations planning trainee, said Monday’s cool, calm weather allowed crews to establish lines around the fire’s edge where it crossed over the Manhattan Road, and more crews in and around Red Feather Lakes and Glacier View can make sure those areas are protected.

John Norton-Jensen, planning operations trainee for the Northwest Incident Command, said Tuesday morning that the fire “did not really grow too much” Monday.

“We had a good day, a good day yesterday,” Norton-Jensen said in the Tuesday morning video update. “We had a lot of engines and a lot of fire crews securing heat around houses. We had a lot of containment lines going in … a lot of good progress in this kind of northeast part of the fire.”

Crews also are working on the Shambhala property to put out hot spots and provide a fire line around the structures. They are conducting burnouts near Colorado Highway 14 to prevent further spread of the fire.

Carslon said the weekend’s fire surge that damaged structures in the Shambhala area was caused by fire above the Colorado Parks and Wildlife’s fish hatchery west of Rustic. Westerly winds of up to 65 mph blew embers north across Colorado 14 and ignited beetle-kill trees, causing spot fires that quickly grew.

The smoke that drifted into the Fort Collins area later in the day Monday was caused by the Mullen Fire in southern Wyoming, according to the Cameron Peak Fire smoke outlook report.

Tuesday’s outlook is for smoke impact for the northern Front Range urban corridor again in the afternoon and evening. Wellington, Fort Collins and Loveland will be the first to experience smoke, then Greeley. Periods of unhealthy smoke may exist over any of these areas, but the daily averages should remain moderate to unhealthy for sensitive groups.