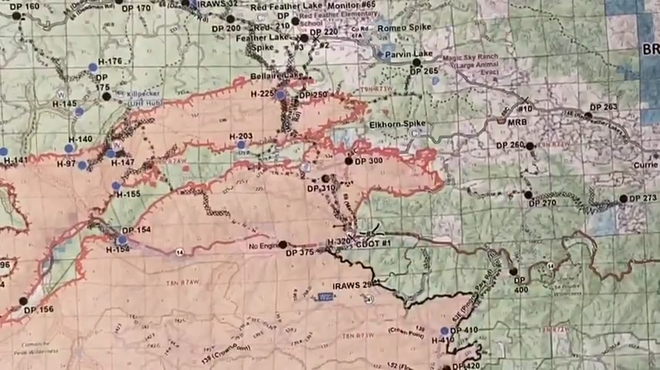 Crews are assessing the damage left by the Cameron Peak Fire’s 20,000-acre run over the past three days. Reports of impacted private homes and property and public campgrounds are expected as early as Tuesday.

The fire has grown to 124,026 acres, as of Monday morning. Containment decreased to 21% in recent days due to the recent fire expansion. There were 815 personnel assigned to fire Sunday.

Known structure damage occurred in the Rustic area along Colorado Highway 14 and along the Manhattan and Boy Scout roads after the fire was fanned by wind gusts in excess of 60 mph and dry, warm conditions.

That was a good note to leave on, Carlson said — Monday was the final day of the Arizona-based Southwest Area Incident Team 3’s three weeks of leading the fire’s management. Before taking over the Cameron Peak Fire, the team led management of the Williams Fork Fire southwest of Fraser.

“In my 20 years of doing this job, I don’t think I’ve seen as much support as this one,” said Carlson, who was largely responsible for the daily video incident reports and answering questions on the fire’s nightly question-and-answer video. “I will be tracking the fire until 3 feet of snow is sitting on it, which hopefully is soon.”

Carlson said he hopes his next trip to Colorado is for pleasure, not business.

“I look forward to coming back to Colorado, but next time not on a fire but for vacation,” he said. “Every time I’ve been here, it’s been on a large fire, so I think I would like to do something a little bit different next time here.”

What’s next for firefighting efforts

After battling the challenging weather since Friday, crews received a reprieve Sunday afternoon when the wind calmed, temperatures dropped and the relative humidity rose.

That allowed crews to mostly establish a network of lines along the fire’s edge between south of Red Feather Lakes and Colorado 14, where much of the fire expansion occurred.

Crews will continue to have a heavy presence in the coming days in those areas impacted by the fire’s latest run.

Carlson said a high priority for the incoming Pacific Northwest Incident Management Team 6, which takes command of the fire Tuesday, will be 8 miles of line on the north side of the fire along Deadman Road and wrapping along forest service roads around the northwest edge of the fire.

This line in part further protects the many homes in Crystal Lakes and creates a box around that section of the fire.