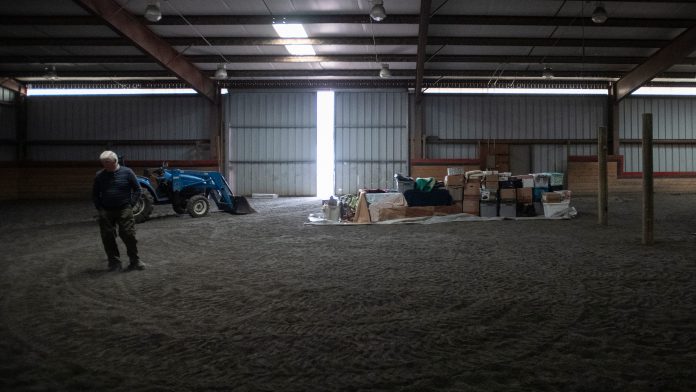 Deanna and Joe Skelton started pulling pictures off the walls and packing other keepsakes into boxes Aug. 22, when they were notified that a voluntary evacuation advisory had been issued for their home and the surrounding area because of the Cameron Peak Fire nearly 30 miles away.

They gathered up those boxes and started stacking them in the center of an indoor metal horse arena on their 200-acre ranch in the foothills west of Fort Collins. They moved their three horses to Fort Lupton for temporary boarding.

While others might have questioned the danger their home was in at the time — it’s located along Stove Prairie Road, between Rist and Buckhorn canyons — the Skeltons weren’t taking any chances.

They remembered the frantic nature of their departure June 9, 2012, when the High Park Fire that burned down their previous home in the same location rushed toward them from the west. Charred remnants of that home fill a stall in their horse arena, serving as a constant reminder of what was lost.

“The High Park Fire just blew up immediately, so you didn’t have any time to get anything out,” Joe Skelton said Wednesday. “We got warned at 11 (a.m.) you may have to get out and were notified at 4 (p.m.), ‘Hey, you have to get out now.’ ”

The “get out now” mandatory evacuation order for the Cameron Peak Fire came Sunday morning, when gusting winds sent the flames racing toward them. The fire that had been burning since Aug. 13 in the upper Poudre Canyon had grown from 16,602 acres to nearly 60,000 when the first of two voluntary evacuation advisories were issued for their area.

They packed what they could into the back of their Subaru station wagon, took a few more boxes to the horse arena that survived the more than 87,000-acre High Park Fire, grabbed their two cats and got out of the area quickly.

The following day, the fire jumped a containment line along Pingree Park Road to the west of the Skeltons’ home while growing to more than 102,000 acres.

“We were ready this time, knowing that if the winds kicked up out of the west, that sucker was going to come right towards us,” Joe said. “When it first started, we were like 30 miles from the fire. Now we’re like seven miles away.”

An interactive map of the Cameron Peak Fire updated daily by the Rocky Mountain Incident Command Team Black, one of three management teams overseeing firefighting operations, confirmed that the fire’s western edge was about 7½ miles from the Skeltons’ home when snow halted its movement in that direction Tuesday.

Deanna, 74, and Joe, 75, moved into the same LaQuinta Inn in Loveland that they had been in for nearly a month after the High Park Fire while insurance adjusters processed their claim. It was one of the few hotels, they said, that would allow them to bring their two cats along.

“One of them is about 19 years old and acts like he remembers doing this before,” Joe said.

After High Park, a structural engineer gave the go-ahead for them to rebuild on the existing foundation on property they bought nearly 30 years ago, he said. They ran a successful business there, Skelton Mountain Dream Ranch, breeding pure Spanish horses for competitive dressage before cutting back a few years ago so they could travel more as they eased into retirement.

There was no way, he said, that he and Deanna were going to give up their “million-dollar view” to the glade between Devils’ Backbone and Bobcat Ridge.

“The thought never crossed my mind that we wouldn’t rebuild,” he said. “I’m a Texas boy from a long time ago, and my dad, when I was young, brought us to Colorado almost every summer so he could trout fish. I never fell in love with trout fishing, but I love the mountains. I’ve climbed all 54 of Colorado’s 14-footers and hiked the Colorado Trail all the way down to Durango.”

So they arranged for the use of a 33-foot travel trailer — connected to the existing electrical system, water well and septic system — and went to work. Thirteen months later, the new home was completed.

“When we rebuilt, we rebuilt with the whole concept in mind to make our house as fire-resistant as we possibly could,” said Joe, a former environmental engineer. “The old house had wood siding, so we went to the Hardie board concrete siding. We put in a metal roof; the old roof was wood shingles. And we spread 5 feet of gravel around the perimeter of the house to prevent any brush from growing right up against it.”

Although the footprint is the same, the new 3-bedroom home was designed entirely different from the old one. The kitchen, great room and master bedroom are located on the ground floor instead of the second story. The other two bedrooms of the new home are upstairs, as are two loft areas that can used as additional sleeping areas when their children, grandchildren and a great-grandchild all come to visit at the same time.

Joe talked to firefighters who had worked the High Park Fire and followed their suggestion to remove as much of the pine beetle-killed timber — both standing and fallen — that he possibly could.

Joe was allowed back on his property to check on things Thursday.

“It looked really good from our perspective,” he said. “It was just like we left it, except now it was damper and there were some patches of snow around, and actually seeing some puddles in our driveway was great. There is no indication right now that there is a fire at our place.”

On Friday, with the blessing of authorities issuing credentials for access to their homes, they moved back in, Joe said.

They don’t plan to move the boxes in the horse arena back to the house yet, though.

“That arena survived the High Park Fire, so I feel confident it will survive no matter what,” Joe said.

He was confident the new house would have a better chance of making it through, too. But he and Deanna don’t plan to stick around to find out if the fire makes another run toward them.

“We’re not even going unpack the car,” Joe said. “If we see this thing blowing up again next week, when it starts getting hot again and temperatures get into the 80s, we’re ready to go.”