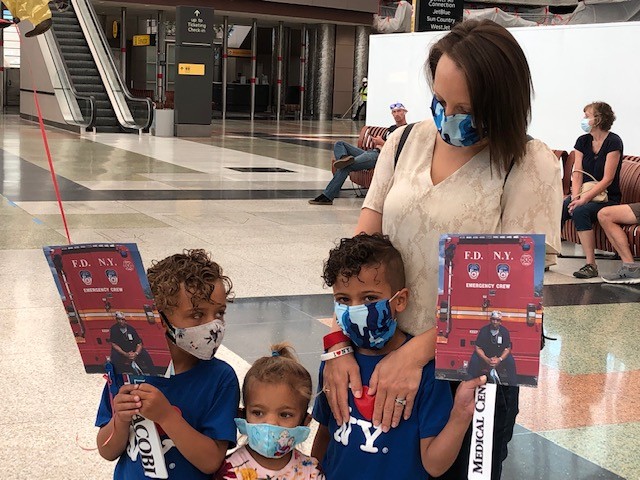 DENVER — When Paul Boykin was asked if he wanted to go serve on the front lines of the COVID-19 pandemic in New York, the young Castle Rock dad jumped at the chance.

His wife, Alicia, was fearful, but supportive.

She said she had to replace her fear with faith that he would come back in good health.

Alicia, and the couple’s three children, 6-year-old Paul, 4-year-old Solomon and 2-year-old Eden, drove to the airport from Castle Rock for a boisterous reunion Friday morning.

With masks over their faces, Alicia led the children into the main terminal.

The children were anxiously awaiting their father’s return, after his six-week stint at Jacobi Hospital in the Bronx.

Alicia came up with a novel way to help the kids countdown the days until their dad’s return.

“We made a chain rope with papers,” she said. “We’ve been cutting (a link) every day, so to throw the last one away was fun.”

After patiently waiting in the terminal for about 30 minutes, the kids spotted their dad as he walked off the escalator.

“Daddy!! Daddy!!” they yelled, while darting between other passengers, to jump into his waiting arms.

Paul hugged each child, and then his wife.

He told Denver7 he saw things in New York that many nurses with 20, 30 or 40 year careers never see.

He said he was struck by the number of care-givers that got sick, and recovered.

“Just yesterday we had a party for one of the first co-workers that contracted COVID, really sick, intubated at one point in time. She got to go home,” he said.

When asked what he’ll remember most about the experience, Boykin replied, “the resilience of people. People of all different walks of life coming together. Being what, really, the United States is about, a united group of people.”

He said he’s happy to be home.

When asked what he plans to do first, he said, since restaurants are closed, he’ll probably go home, catch up on some sleep and just enjoy being with his family again.

Alicia said there’s been a little more chaos without Paul, noting that she’s been in charge of a household with three very active kids.