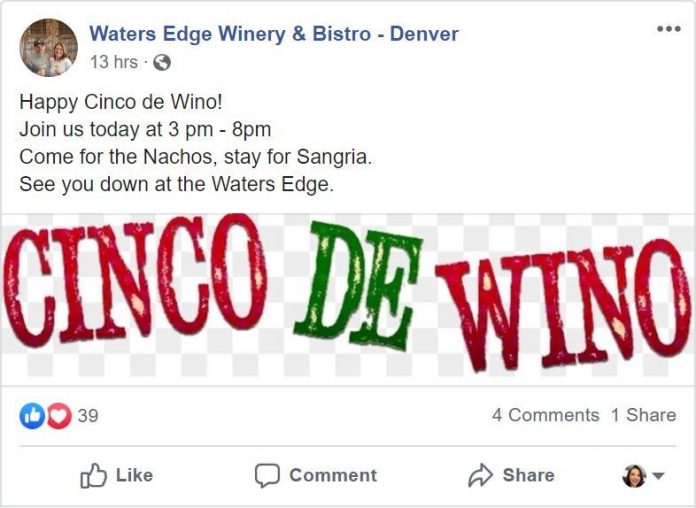 CENTENNIAL, Colo. — The Tri-County Health Department received more than a dozen complaints about a Centennial bistro that opened their doors and allowed customers to dine inside, which violates the governor’s safer-at-home order.

Denver7 went undercover into the restaurant and found the patio buzzing with patrons. At least nine people were sitting in the patio. A sign outside advertised “wine and food to-go,” but much more was offered inside.

“You are welcome to sit wherever, we do have seating in the back parking lot,” a waitress said.

Dine-in areas of restaurants must remain closed until further notice under the Safer-at-Home Public Health Order, which ends on May 26. They can only offer curbside, pick-up or delivery.

As the minutes ticked away, more customers trickled in to dine at the restaurant and no one was wearing a mask.

Denver7’s Adi Guajardo asked the waitress if she was comfortable working around people without masks, and she said she was and had a mask in her purse just in case.

Denver7 located the owner of the bistro, Jennifer Hulan, and asked if she thought it was too early to be open.

“We are about freedom here,” she said.

The owner openly admitted they opened their doors on May 1.

Hulan said she was, “doing it against the governor’s orders.” She added that “the health department was calling me, the attorney general was calling me. I have been putting out fires.”

She initially offered to sit down and talk, but then backtracked.

“I’m a small business owner with my house on the line,” she said.

The Tri-County Health Department has received 17 complaints about people dining at the bistro. A spokesperson with the health department said in a statement that inspector contacted the owner on Friday. On Tuesday, they issued a warning.

Hulan said she had 24 hours to comply with the health department.