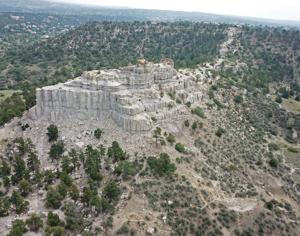 Trails are about to change in a popular Colorado Springs open space, the beginning of what figures to be a broader facelift.

Hikers, mountain bikers and dog walkers from surrounding neighborhoods can expect to find crews working in Austin Bluffs Open Space in the coming weeks and months. The mosaic of forests and meadows — encompassing acreage previously called University Park — is best known for the white, throne-like monolith impossible to miss from Interstate 25: Pulpit Rock, where one job has been ordered.

While visitors have ascended the rock from several paths stomped over the years, the city parks department aims to close those because of damaging, gully-forming erosion and direct people on foot and bike to a new, designated trail.

Stretching about a mile, it will wrap the north side of the rock to an eastern ridge, where the trail will turn back west to the summit. This was the “sustainable” route identified in Austin Bluffs Open Space’s 2020 master plan.

That document, approved by officials after two years of public meetings, also is informing alterations to the Rim and Spine trails. Parts of those trails will remain and other parts closed and rerouted under the watch of Tony Boone, the renowned contractor based in Salida.

In total, the $220,000 project will add more than 4 miles of trail and close about 3 miles deemed to be damaging or “redundant,” Deitemeyer said, “where maybe there’s two or three or four trails that lead to the same location.”

Expected to finish in the fall, the project “will allow us to formally designate and officially open the trail system within Austin Bluffs Open Space,” Deitemeyer said.

Historically, the trail system has been informally made, he explained. “It’s a collection of properties the city acquired over the last 40 years, and without sustainable funding, we just haven’t been able to holistically manage that and address the social (trails).”

The two-year master plan process was an attempt “to balance recreation use and access, while still protecting habitat, the cultural sites and really the unique resources that are found in the open space,” Deitemeyer said.

Mountain bikers went into those meetings with “very strong angst,” recalled Cory Sutela, representing those interests with nonprofit Medicine Wheel Trail Advocates. They suspected trails would be lost after officials’ review, and their suspicions were confirmed: The master plan calls for a 45% reduction.

Such widespread closures and reroutes have been a recent emphasis of city parks leaders, garnering criticism in some circles.

“It was like undiscovered country, and you could create the world you wanted, and it was really cool,” Sutela said of Austin Bluffs Open Space in a previous Gazette interview. “But when you live in a city and have to share resources like this, you have to make some compromises.”

In the coming months and years, more trails will be closed by slash cover-up, vegetating and fencing.

Also to come pending funds: a challenging, hiker-only path up Pulpit Rock partly made by timber steps, and another trail on the rock’s southern face exclusively for downhill mountain bikers.