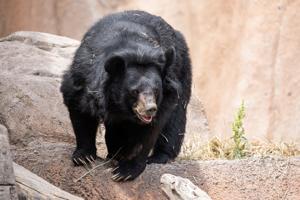 Keepers at Cheyenne Mountain Zoo are mourning the loss of one of their longest-tenured residents, officials said in a news release.

Honey and her sister, Beezler, arrived at the zoo when they were just shy of 18 months old, and “many keepers and millions of guests” were able to witness their progression through adolescence, adulthood, and finally, advanced age.

“Caring for Honey and Beezler was what made me realize I really love bears,” said Erika Furnes, an animal keeper for the bears. “They inspired me to champion an Asiatic black bear research and recovery program in Vietnam, which will receive funding thanks to our Zoo members this year.”

At the time of Honey’s passing, she and Beezler were thought to be the oldest Asiatic black bears in human care. Her lifespan was on par with the median life expectancy of females of her species, which is 29.3 years.

Described as a “sweet old lady” who could at times be “super assertive,” Honey’s personality was distinctly different from her sister, keepers said.

“Honey was the more laid-back of the two,” said Furnes. “She was a slow eater, which I could relate to, since I’m the slowest eater in my family. Beezler would often get to treats first, but when Honey really wanted something, she would stand up to Beezler and protect her portion with her paws.”

The sisters enjoyed a close relationship and typically could be seen together, officials said. Keepers usually found them sleeping near each other in the morning. On Honey’s final day, Beezler could be seen cleaning her sister’s paws, according to the release.

Keepers are watching Beezler closely as she adjusts to life without her sister.

“She received a lot of special enrichment (Saturday), including water in her pool and fresh mud puddles to wallow in. Keepers will continue to give her extra attention in the coming days and weeks, to help make the transition easier for her,” the release stated.

Keepers and officials praised Honey as a “wonderful ambassador for her species.”

“The sisters did their jobs perfectly, which is to make people fall in love with them,” Furnes said.