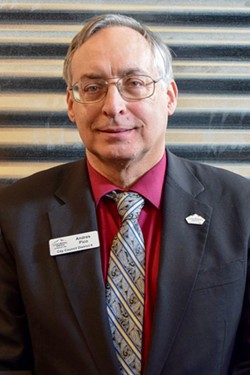 City Councilor Andy Pico angered some Colorado Springs residents with his response to a Palmer High School student’s invitation to an event calling for action on climate change.

“I am writing on behalf of the students of Palmer High School to inform you that this Friday, December 6th, there will be a climate strike in front of City Hall,” Alexander Fix, 17, wrote members of City Council on Dec. 3.

“Your presence to support the efforts to raise awareness of the issues of climate change and/or to discuss the topic would be greatly appreciated,” Fix continued, adding it was “excellent” to see Council President Richard Skorman and Councilor Yolanda Avila at a previous climate strike Sept. 20.

But Pico answered in the negative.

“Alex, I think you all would be a lot better off if you all stayed in class and learned some actual science rather than debunked one-sided propaganda,” he wrote.

“I am incredibly disappointed by the sheer amounts of disrespect and ignorance in your response,” Fix responded. “…I have never come across anything debunking the existence of climate change or the fact that it is harmful, and I would certainly welcome you to tell me what you claim refutes these facts, but otherwise all science I have encountered in and outside of school supports my position.”

Following that exchange, Pico responded again to Fix in a somewhat softer tone.

“I appreciate your concern and applaud your energy and enthusiasm on an issue of concern,” he wrote Dec. 4.

“That you have not seen or heard anything of the other side of the debate is precisely the problem and the failure of the school system,” Pico continued. “I’ve been researching this issue for over 20 years and have been writing and speaking on this issue for over 15 years.”

Pico later told the Independent that while he does believe the planet is warming, it’s doing so at a much slower rate than mainstream climate scientists say. Pico also thinks human activity accounts for a small portion of global warming.

On Dec. 5, Pico apologized to Fix for the tone of his original response, and the two both say they hope to have a conversation on the topic in the future.

Fix’s mother, Valerie Fix, notes her son had a perfect score on the ACT exam and is a National Merit semifinalist. He plans to study physics and computer science in college.

Pico, a Republican, announced in September that he will run for the State House District 16 seat in 2020.

Teachers don’t try to force a singular view on students, Geoff Lewis said: “We’re teaching them critical thinking skills. We’re telling them to go to the evidence. Do the research. Find the data, evaluate that information.”

The Indy reached out to Mayor John Suthers and the other eight City Council members asking them whether they believe global warming is real and caused by human activity. Below are the responses we received.

Councilor Yolanda Avila: “Yes, I do, and we need to do all in our power to protect our planet for this generation and the generations to come. I truly appreciate our youth who are taking the lead in this fight.”

Councilor Jill Gaebler: “I definitely believe the science has proved climate change is anthropogenic, but as this position remains controversial, I prefer to focus on facts everyone can agree upon…that fossil fuel emissions are terrible for our health, exacerbate many medical conditions, and are just outright harmful to any living being who breathes. For that reason alone I hope we can all agree that reducing these emissions is in the best interest of our community, nation, and planet.”

Councilor Bill Murray: “No denying it, climate warming is real, while its’ cause or should I say causes has room for nuancing. 100% of the warming is due to the climate. The climate is made up of many facets, one of which is pollution caused by human factors. Whether it’s the burning of forests in Borneo or forests in the Amazon or fossil fuel plants throughout this planet, it is a known contributor. We need to slow any contributors while we study and prepare for the effects. The effects, as envisioned by numerous studies, will be dramatic for the majority of the humans (living in the littorals) and for the rest of the planet. It is time to take constructive action and set the example.”

Council President Richard Skorman: “Yes I believe Global Warming is real and caused by human activities. I do think that Andy Pico has a right to his opinions, but as I said at the rally, I wholeheartedly disagree with his view. It’s not just 95%/97% of scientists agree, almost every country and every governing body in the world agree, and the vast majority of Americans agree, but there is no denying the huge impact a warming planet is already having, particularly in the developing world, and that it is happening for quicker than anyone imagined. My question to Andy and other human-caused Global Warming deniers, ‘with so much happening right now and with such catastrophic predictions by scientists, why wouldn’t you at least want to hedge your bets and try to prepare for this uncertain future?”