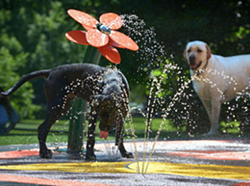 Master plan proposals for three historic downtown parks call for removing trees and adding commerce, such as snack booths and places for open-air markets and other events.

For example, here’s what it says about trees in Antlers Park, which is located immediately west of The Antlers hotel.

The existing park has a number of trees that may soon be threatened by emerald ash borer or are in poor condition. The master plan preserves 44 trees including three historically significant trees, adds 66 new trees, using a more diverse and resilient species palette.

Alamo Square, where the city-owned Pioneers Museum is located, also would see trees  replaced with 100 new trees, while Acacia Park’s plan would add 77 trees. None of the descriptions of tree removal specify exactly how many trees would be removed.

All three plans call for features planners hope would draw more people, like playgrounds, a dog park (in Antlers Park), places where events could be held, a permanent ice rink (Acacia Park) that would convert to a summer games area and a “City Porch” along the south side of Alamo Square where foot trucks would line up and concerts could take place.

Of course, all of these plans necessarily pivot on people’s willingness to bunch up and crowd together, which is forbidden amid the COVID-19 pandemic.

As Parks Director Karen Palus said in a release, “Our downtown parks have played an important role in our history. They are the places our community comes together to celebrate, to relax and to enjoy one another’s company – the exact things we’re longing to be able to do again once it’s safe to do so.”

While some might oppose the carnival-type atmosphere the city pushes for in these plans, it’s hard to argue with some elements, like this change to the southeast entrance to Antlers Park.

Not all features would be changed, however. In Acacia Park, the Uncle Wilber splash fountain would remain in place, as would the band shell, although city officials also have their eye on possibly tearing it down and building a facility where more events could be held.

As the proposal explains:

Built in 1914, the existing bandshell hosted events like bands and square dancing. The master plan calls for a future feasibility study of the bandshell to determine whether renovation or replacement makes the most sense.  Many citizens support a new open air stage with improved lighting, sound, and open lines of sight as a new space to support events.

But the city claims nothing is set in stone, and invites residents feedback through an online survey, found here (go the bottom of the page for each park to comment), but the deadline for comments is May 12.

Funding for the makeovers, costing about $2 million, comes from the revenue retention measure approved by voters on the November 2019 ballot.