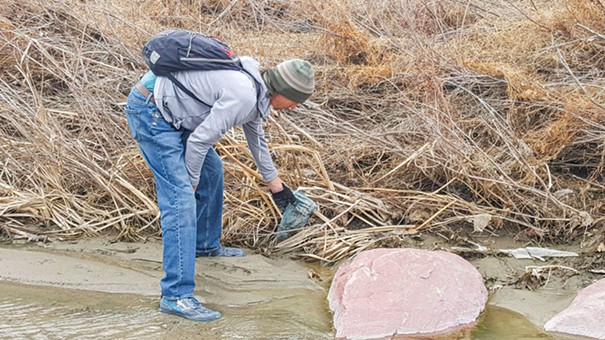 Every Sunday, Joel Schott, like thousands of other Colorado Springs residents, awakes to find a plastic bag of newsprint ads in his driveway. He simply picks it up and trashes it.

But not everyone does that, and the bags of ads pile up in gutters and, worse, in the city’s creeks and drainage channels. Schott knows this because he hikes those channels and shakes his head at the idea that those materials are clogging waterways — waterways that are already the subject of a pending federal lawsuit that alleges the city violated the Clean Water Act.

So Schott tried to file a complaint for littering against the business responsible for tossing the bags — The Gazette.

He’s not the only one. The city has received about a dozen similar complaints over the last year but turned them away, because city officials saw it as a First Amendment issue — the right to free speech.

On March 6, the city finalized a new approach to such complaints. While complicated, the procedure allows the city to prosecute the newspaper for distribution of handbills against the wishes of recipients.

“Once whoever the producer is [of the ad packet] is found guilty,” says Mitch Hammes, Neighborhood Services manager who oversees code enforcement, “the judge would determine what the fine is.”

A Gazette employee shared some information before referring the Indy to someone else, but the Indy never heard back in response to several emails and phone calls.

Schott moved here from Houston about four years ago after falling in love with the area while attending a relative’s Air Force Academy graduation. Captivated by the scenery, he spends lots of time on trails and along drainage channels where he encounters those bags and other trash.

“For years, The Gazette has been throwing [the packets] on driveways all throughout this beautiful city,” he says in an email. The bags often sit in gutters for weeks and eventually wash into the storm sewer system, he says.

It’s worth noting the Indy has heard from other readers in the last several years voicing similar complaints.

So has the city. Hammes says when a resident complained recently and asked why the city couldn’t act, he met with the City Attorney’s Office. After studying the city’s codes, officials devised a procedure for handling such complaints under the provision regarding dissemination of handbills on city and private property.

“There’s a lot of steps the homeowner has to take before we can prosecute,” he says.

First, a homeowner must send written notice to the newspaper, by certified mail, asking for delivery to be discontinued. He or she also must post a sign on the property, visible from the street, stating hand bills or advertisements are forbidden, Hammes says.

The resident then must wait 10 days after receiving confirmation the certified letter was delivered, and then wait another 10 days after that. If another ad packet arrives on the driveway, “We have a violation we can prosecute,” Hammes says.

After arriving at the new procedure on March 6, Hammes reports the city is now willing to take complaints from residents and prosecute, as long as the complaining resident is willing to testify.

When the Indy initially made contact with The Gazette, we were told the ad packets are delivered to 120,000 households that don’t subscribe to the daily paper, that thousands of people had requested they be removed from the delivery list and that the newspaper had granted those requests.

“We do have independent contractors who deliver and I’m not going to say that mistakes don’t happen,” The Gazette employee said.

Schott, for one, says he’s willing to follow the city’s procedure but notes after he complained for the third time to the Gazette a month ago, he didn’t receive the packet on either March 15 or 22.