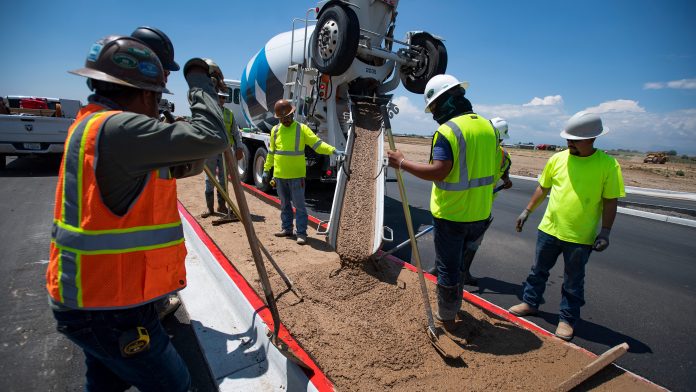 A maze of road construction projects that started in spring along a busy travel corridor has made for maddening times for drivers between Harmony Road and Colorado Highway 392.

And now that misery between Fort Collins, Timnath and Windsor is being extended.

The cause for this year’s construction consternation involves delays due to abundant spring moisture, the inability to coordinate projects, competition for road construction materials and services, and a convergence of projects.

Jared Fiel, spokesperson for the Colorado Department of Transportation’s North Region, said his agency feels the same angst as the general public in that his fellow CDOT workers live and work in the area and drive through or around the same road construction as they do.

“We have been stuck in the same delays as they have, and we don’t like it any better than they do,” Fiel said. “We understand their frustration, if not more because we know how much planning we do to try and mitigate these things.”

He said CDOT, cities, towns and counties meet to coordinate projects as best they can. However, he added the best-made plans can fall prey to weather and a narrow road construction season window in the state.

“As much as we try to work together, we are all competing to get the projects done in the limited amount of time we have,” Fiel said. “Sometimes it works out, other times it doesn’t, and when those projects collide, it can be a hassle.”

Here is a look at the road construction projects in this 3-mile stretch that continue to take a toll on Northern Colorado drivers.

Construction of the Poudre River and Great Western Railway bridges as part of the North I-25 Express Lanes Project has increasingly hampered traffic since spring due to lane shifts and concrete safety barriers that hug I-25 and cause drivers anxiety.

And as drivers tried to escape those projects, their options became even more restricted.

Also in May, the east frontage road from Kechter Road north to Swetsville Zoo Road (near Costco) was permanently closed to through traffic as part of the North I-25 Express Lanes Project.

The closure was necessary because northbound I-25 lanes will be widened and moved to the east of their current configuration, which will take over a portion of the former frontage road.

The town of Timnath is working with the owners of the Connell property south of Costco to extend Weitzel Street south to connect with Larimer County Road 5 as a replacement for the closed frontage road.

Until Weitzel Street is extended, the only access to the retail around Costco will be via Harmony Road.

Kechter Road will be closed Sept. 10 through April 13 as part of the North I-25 Express Lanes Project.

During that time, crews will raise the surrounding area, build the bridges and add travel lanes as well as bike lanes, sidewalks and walls on either side of the bridge over the interstate. Also, a roundabout will be built on the west side of the bridge where Kechter Road and the west frontage road intersect.

Road closure: Shields Street in Fort Collins to close for a month

There is good news and bad news here.

The good news is that Colorado Highway 392 just east of Interstate 25 fully opened Wednesday after months of work to add a through lane, turn lanes and bike lanes around Larimer County Road 5 to alleviate congestion that often occurred during morning and evening rush hours.

The bad news is the reopening of Larimer County 5 has been delayed.

Since spring, two sections of Larimer County Road 5 totaling 1.25 miles have been closed at different times as part of two housing/retail developments under construction along the county road between Colorado 392 and Kechter Road.

The two-lane County Road 5 had become increasingly busy as drivers used it as a diversion from driving I-25 as construction and road-closing crashes increased.

Town of Windsor engineers tried to get those projects done at the same time, but the timetable didn’t work, resulting in two closures, the second of which is being extended.

Doug Roth, town of Windsor engineer for the project, said it is unlikely that section of Larimer County Road 5 will fully reopen until the third or fourth week of July but the delay could run longer.

In addition to rain delays, other issues have held up the road from opening on schedule.

One is coordination of engineering and other work between the contractor for Ascent Classical Academy and the town of Windsor’s road contractor at the charter school entrance off the county road being built along the stretch.

Another is the road project contractor was having a difficult time finding a company to stripe the road because of demand during a busy road construction season. Roth said striping of the road isn’t expected to start until July 6 and it will take a couple days to complete the striping.

On July 9, the west lanes of the road are scheduled to open to one-lane traffic in each direction, with traffic controllers present and 25 mph speed limit.

Once the work entering the Ascent Classical Academy is finished on the east section of the road, it will be striped, which is expected to take place in late July.

As maddening as it can be to be stuck in traffic or have to drive out of your way because of these projects, the best advice is to just sit back and envision how much smoother traffic will flow once the projects are done.

Which is easier said than done.