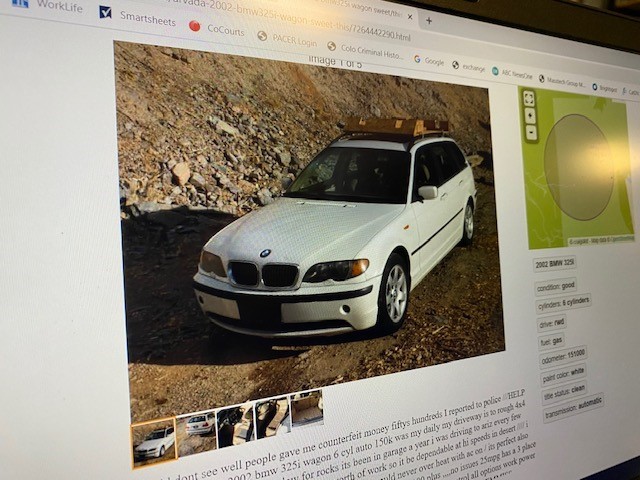 GOLDEN, Colo. — A Jefferson County man, who thought he was selling his car for a fair price, ended up getting swindled.

Anthony Anderson told Denver7 he wanted to sell his 2002 BMW 325i wagon, to keep it from getting damaged on the rough mountain driveway of the home where he lives in Coal Creek Canyon.

He placed an ad on Craigslist.

“The car was sitting right here,” he told Denver7, pointing to a spot in the garage where he was working on his pickup.

Anderson said he also planned to sell his pickup and was going to use the proceeds from both sales to purchase an SUV with more room for his dog, Falcon.

He said a dark complected man, in his 60s, responded to the ad, drove up the canyon, test drove the wagon and said he’d take it.

The owner told Denver7 he still had grease on his hands from working on his pickup, so he just placed the cash in his pocket.

He said he saw stripes on the one hundred dollar bills, so he assumed they were okay.

“The next morning I put them in my wallet, went to the bank and handed them to the teller,” he said.

He was shocked when the teller at Keybank told him the bills were no good.

“I almost had a heart attack,” he said. “I’m almost 70 years old and it took my breath away. I still haven’t gotten over it.”

Now, Anderson is asking for help getting his car back.

He said the suspect, who appeared to be in his 60s, was a smooth talker who said he likes to buy things from older people because they take care of them.

“I think he knows older people can’t see as well, so when he hands you these bills, unless you really, really, really look, you’re not going to know,” he said.

The Secret Service had earlier told Denver7 that counterfeit crooks cost Denver area businesses and individuals about $2-million a year.

When asked how individuals who sell online can protect themselves, the Secret Service said counterfeit detector pens don’t always work on some of the paper used.

The Jefferson County Sheriff’s Office advises that sellers conduct transactions in front of a police department or sheriff’s office with cameras.

A spokesman also suggested snapping photos of the customer, the customer’s car and his license plate.

If the buyer is reluctant to comply, “there’s probably a reason why,” Anderson said.

He’s asking the public to keep an eye out for his white BMW station wagon, which has a custom made bike rack on the roof.

The wagon is now considered stolen.